Other hyderabadi recipes to be tried on the blog are til ki chutney, turai ki sabzi, khatti dal, tamatar ki chutney etc…

This recipe is quite interesting with capsicum flavor in meat and also added into it is aloo or potatoes to give a tasty flavor to the shimla mirch keema recipe.

The keema and shimla mirch combination goes well with roti or rice. The recipe which I posted is a gravy dish with tomatoes into it and also lifting the flavor is methi leaves or fenugreek leaves in the keema capsicum recipe.

I  use this combination when I feel like trying different shimla mirch recipes and bored of eating regular capsicum recipes.

One important point while using capsicum mainly green capsicum is that the vegetable has to be deseeded as the seeds inside the shimla mirch are very hot and cannot be eaten if the seeds occur in the curry.

Eating capsicum is very good for health and there are different capsicums available and they  are red , green and yellow. Capsicum can be used in many different ways like they are usually added in stuffings and for presenting food in colorful manner. 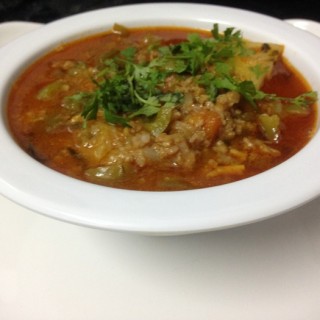 Calories: 250kcal
Want To Watch Video Recipes?SUBSCRIBE US ON YOUTUBE!