How are soya chunks obtained?

Basically these are small brown round balls made from soy flour which have a high protein content.

How healthy are they?

It is a substitute for meat and poultry and it has high amount of protein content and is more nutritive than eggs and meat.

This is a wonderful way of having proteins in our diet and these chunks can be included in our diet in many ways such as curries, gravies, masala recipes as well as added in mixed veggies too such as veg pulao and other flavorful rice recipes.

How to cook a meal maker?

Are the chunks healthy?

Onions: Here, in this recipe I have used sliced onions but onions can be made in the form of puree too and added.

Tomatoes: I have made a puree of tomatoes by adding dry spices and then cooked the puree.

Curd: A little bit of yogurt may balance the sour flavor of the curry and therefore it is better to add yogurt or can be skipped as an optional ingredient.

Spices and whole spices: To make the recipe light I have added mild whole spices such as cinnamon and cloves.

The first step is to boil the meal maker for few minutes by adding some salt and then straining them and squeezing the water from each meal maker. Then the curry is made by heating oil and spices. The sliced onions are cooked until slight brown.

Tomatoes are chopped and blended into a puree by adding some salt and red chilli powder. The puree is added into the curry along with dry spices.

This curry is perfect to be eaten with rice, chapati or mainly it tastes good with pulao recipes such as vegetable pulao or bagara rice. 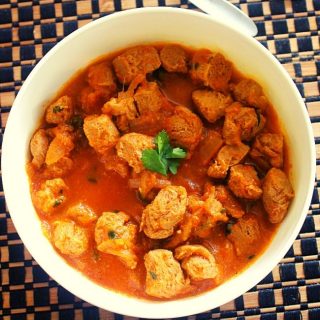 Making of the curry: