After a very long time I am posting an egg recipe which is a best masala gravy curry recipe.

It is a simple recipe with basic ingredients and egg curry is commonly made when we do not wish to eat mutton or chicken in our daily regular diet.

I love to make many kinds of egg recipes that are suitable for kids as well. Egg recipes can be made for breakfast, lunch or dinner.

Egg is very healthy to our health packed with full of proteins and nutrients. It should be included in our diet everyday if you are a non vegetarian.

It is advisable to take along with milk every morning and is a very healthy breakfast substitute. Kids should be given egg almost everyday for a better health.

Egg can be eaten plain by just frying and boiling but there are various other ways in utilizing egg by making their rice recipes like fried rice and biryani or egg gravies which are made in several ways across different places in India.

Eggs can also be combined with potatoes and tomatoes which give an amazing dish to have it with rice.

This is a special dhaba style masala gravy made using onion tomato gravy and cooking the gravy by adding fried boiled eggs.

This egg masala curry can be combined with rice and is a great curry recipe for lunch or dinners.

It can be served with pulao recipes too which is a perfect combination of egg masala and pulao.

Egg masala can be made in dry form, fry form or in the form of a gravy curry. Here, I have made in gravy form which is simply cooked in tomato gravy.

The curry is very mild, not too spicy and basic gravy which appears red in color and added some aromatic spices to enhance the flavors.

I have added kasoori methi in the end to lift up the flavors of the curry and to give a wonderful aroma to the egg masala recipe.

I have  made a video procedure inorder to help my blog readers understand it in much better way which I have uploaded below.

How to make egg masala recipe card below: 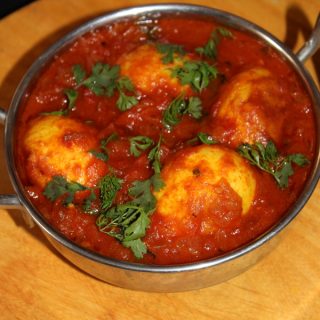 1.If one does not have enough time to fry the eggs then just adding plain boiled eggs into the curry and cooking for a while too gives a delicious taste to the gravy curry.