Maggi noodles, a simple 5 minute quick to do recipe using vegetables and Maggi noodles pack which can be eaten as a snack or a breakfast recipe. Maggi is not only eaten by kids but it is a favourite recipe among youngsters too. Also check out other breakfast recipes from the blog which are instant and healthy such as bread omelette, rava upma, oats upma etc...

This is a very simple and yummy breakfast recipe which is made by simply sauteing vegetables and using the maggi powder that is a readily available taste maker given inside the maggi noodles packet, and cooking the given noodles from the packet in water brings out an amazing outcome of the noodles.

How noodles are usually made?

Noodles are usually made by using a dough that could be atta/ wheat flour or maida/all purpose flour simply mixed with water and made into a dough and creating long strips of the dough.

They can be either cooked or fried and made into any dish of our liking.

Making noodles at home could be quite stressful and for all those who are fond of noodles can now head to the supermarkets and find readily available noodles and make recipes in just a couple of minutes.

What makes this recipe so simple?

Readily available packets are already available in markets in several brands and look out for that kind of packets which already consist of noodles and the masala powder or the tastemaker along with it.

The trick is to just saute some veggies and cook the noodles and the masala/tastemaker together in some water without overcooking them.

What vegetables can be added?

Several veggies such as beans, green onions, bell peppers and several other veggies can be used to make these noodles.

Below is the simple step by step details to make this recipe along with a video attached which could help in making it easier.

This recipe can be cooked with many variations and here I have come with the simplest and most common form of making the Maggi.

In the upcoming Maggi posts, I shall be sharing many variations of making Maggi noodles which are amazing dishes for kids breakfast or as snacks. 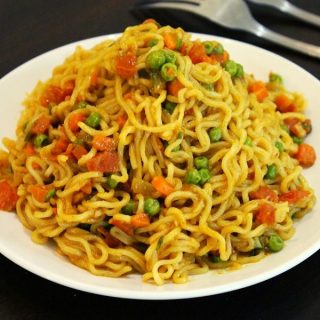 Leave your comments or any queries below in the comment section and we are always happy to help you....

The above post is not a promotion of the brand and is simply a tried and tested recipe by the blog owner for the blog readers.

Do we have to make maggi masala at home?

Can we add any vegetables

Yes, adding veggies our own choice is helpful to get a good taste. Adding onions, carrots, beans gives good taste than any other veggies.

Is adding salt and other spices necessary?

Adding them enhances the flavors of the plain maggi and adding vegetables makes it healthier than just eating plain noodles.

Can we add eggs to the maggi?

Yes, stir-fried scrambled eggs can be added in the end to make it in a different way but if looking forward to make only vegetable maggi then it is better to skip eggs.