Nargisi Kofta is a yummy meat kofta recipe similar to mutton kofta but it takes in the egg as a stuffing. Nargisi Kofta is a wonderful mutton keema recipe with egg stuffing and deep-fried recipe eaten plain as a snack or it can be eaten with gravy in it.

Other non veg recipes on the blog are rogan josh, keema recipe etc...

The kofta recipe is a snack item or it can be eaten as a main dish with rice delicacies and it can also be made as a ramazan special recipe.

This kofta is a favorite mutton ball recipe which gives an interesting taste if egg is added into it. Eggs are boiled and stuffed into the mutton keema and are deep fried.

This ramazan special snack item is perfect during iftar and along with the nargisi koftas, gravy for this special dish too can be made.

Nargisi kofta can be made mainly with mutton keema and eggs but it can also be made into a vegetarian recipe by making koftas with vegetables and stuffing egg into it.

The kofta has to be made with minced meat by adding all the spices into it and using boiled eggs to stuff between them and covering the boiled eggs tightly with the keema mixture and deep frying these koftas in oil.

The gravy  is prepared using tomato puree and dry fruit paste and onions which gives an amazing flavor to the koftas.

The gravy  gives more delicious flavor to the kofta and it perfectly goes well with all the rice pulao recipes.

Nargisi kofta is an all time favorite dish amongst muslims and is quite popular in muslim regions all across India like Lucknow, Hyderabad and in Pakistan too.

Below are the recipe details on making this delicious kofta recipe using mutton keema or lamb kheema. 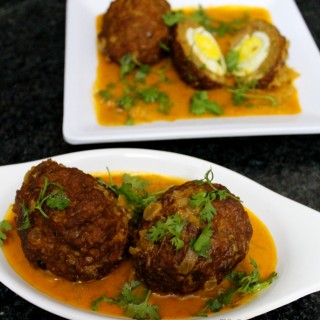 For the nargisi kofta:

For the nargisi kofta curry:

For the nargisi kofta:

For the nargisi kofta curry:

Here in this recipe I have used only soaked cashew paste but, one can also add soaked and peeled almond paste along with it while making the gravy...