Veg manchurian here in this recipe is made by making manchurian balls using grated cabbage and deep frying them. The balls are then added in a gravy.

Now how the manchurian gravy is made?

Just without adding any corn starch, spices, salt and sauces, this method gives us a gravy consistency.

To make veg manchurian here, I have made use of grated/chopped cabbage but one can use any kind of vegetables like grated carrots or grated cauliflower too and then deep fry those balls.

This is a simple 3 step recipe and can be cooked quite easily and be given to kids as evening recipes and nothing could be as simple as these ching's masala recipes which dish out the recipes in simple 2-3 steps and in just a couple of minutes.

I would be sharing a video procedure too inorder to help my viewers understand it in a more better way. 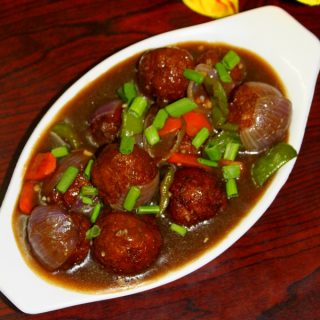 1. Here, I have used cabbage to make manchurian balls but one can also make use of cauliflower or carrots or any other preferred vegetable to make the balls.
2. The masala is a ready made masala which does not require any other salt, spices and sauces.
3. You can find these masalas anywhere online or in grocery stores.
4. With the same masala, we can not only make veg manchurian but we can also make chicken manchurian with the same procedure just by replacing vegetables with minced chicken.