Aloo Capsicum Recipe is a side dish curry recipe made using potatoes(aloo) and green capsicum(shimla mirch). This aloo shimla mirch recipe is an awesome vegetarian recipe that goes well with rotis.

In this recipe I have made the dish just by using onions but, one can also add tomatoes too to make aloo capsicum. It is a very simple everyday breakfast side dish for roti.

It is basically a stir fried dish which is the best way to combine these two veggies than making a curry as making this stir fried way tastes much better than making it in the form of gravy or curry.

Capsicum and aloo can be combined in many ways with other veggies such as capsicumor bell peppers are used in many dishes such as fried rice recipes, while making kababs and also potato is combined along with many veggies such as aloo matar, aloo baingan etc...

Aloo capsicum can also be eaten with rice too and this recipe using aloo and shimla mirch/potato shimla mirch can be tried with many variations. This side dish goes great with parathas too.

Shimla mirch aka capsicum is a wonderful vegetable which can be used to make various kinds of recipes and I shall be glad to introduce different shimla mirch recipes as I continue blogging.

Shimla mirch and aloo are vegetabes which can be used both with veg dishes and also to make non veg recipes. The combination of these vegetables in any dish turns out really yummy.

Aloo capsicum here is a simple, easy and plain dish made using few ingredients and yet a tasty one. I have cut the veggies into thin long slices but one can even roughly chop them.

There is no gravy in the recipe and can easily go with roti or paratha recipes.

Let us check out the recipe details on how to make aloo shimla mirch below... 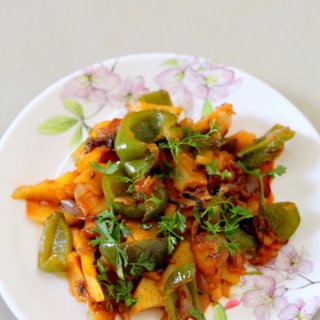 1.The ratio of shimla mirch and potatoes can be varied depending on one's preference.

Nutrition Facts
Aloo Capsicum Recipe or Aloo Shimla Mirch
Amount Per Serving
Calories 290
* Percent Daily Values are based on a 2000 calorie diet.
WANT TO WATCH VIDEO RECIPES?SUBSCRIBE US ON YOUTUBE