Spanish Omelette, is an egg-based omelette made using potatoes and eggs combined in the form of an omelette. This is a common International breakfast recipe that has become quite popular around the world as a quick egg recipe.

There are various other omelettes already shared on the blog and shall be posting many more as I update but the one's posted are masala omelette, egg omelette, bread omelette , bread toast which use eggs to make them...

It is a very simple and easy omelette similar to the one made using eggs which are basically beaten well. It is then spread like an omelette and cooked well on both sides.

It is mainly made in Spain and is one of the popular recipes in those regions and is popularly known as 'tortilla espanola' in Spanish.

The difference in making spanish style of omelette is mainly the use of potatoes which are finely sliced and stir fried a little before adding them to the omelette mixture. Once the potatoes are done well, they are mixed with omelet mix and made in the form of an omelette.

It is mainly the use of potatoes which makes the omelet a very special and delicious.

When and how to serve this omelet?

It is mainly served as a breakfast recipe because it has all the ingredients that actually make a good breakfast.

It tastes best if eaten plain or can be eaten with any flat breads or have it as a snack by dipping it with some ketchup.

Different ways of making it?

Here, in this omelette, I am making it by adding some spices and herbs to the omelet mixture and just using stir fried potato slices in the mix.

But, there are several ways to make this omelette and to make variations to it such as adding cheese to make the omelette more cheesy and this can be easily done by just adding some grated cheese into the omelet mix along with potatoes and eggs.

But since we mainly use potatoes to make the omelette, it can be called a Potato Omelet as well which is mainly made for breakfast recipes.

Healthy way of making this omelette

We all are familiar with the health benefits of Eggs but if one is looking forward to make it in a healthy way, there are few things that should be kept in mind while making it.

Eggs are quite healthy and should be included regularly in diet. They are a good source of Vitamin A and should be mainly eaten as boiled for more benefits and the white part of the egg is even more healthier than the yellow one.

The difficulty level of making the Omelet?

The omelette takes just few minutes to get perfectly cooked once the potatoes are done and it takes approx... 15 minutes for perfectly stir fried potato. Then the rest of the procedure is as easy as the basic omelette method.

Here, I have just added salt, turmeric and a tablespoon of chopped onions to cook the potatoes. But it can be cooked in many other ways ranging from light to spicy such as I have already mentioned one way of potato fry on my blog, which is stir fried by adding some more dry spices.

Check out the detailed recipe on making potato omelette or spanish omelette recipe below and do check out the video for the recipe too as it would be more helpful...

To stir fry the potato: 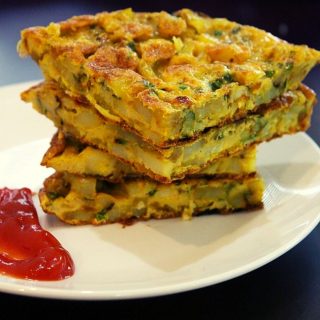 To make the omelette:

To stir fry the potato:

What is the difference between an omelette and spanish omelet?

Omelette can be made in various ways and this is a special omelette. The difference between an ordinary omelet and spanish one is potatoes. In the omelette mixture normally, cooked potatoes are added and then the potato omelet mixture is spread like a pancake and cooked well on both sides.
Ordinary omelet does not use any cooked potatoes but the eggs are beaten well with basic dry spices such as salt and pepper and made like an omelet pancake by cooking it well.

How can we modify omelette?

I have shared the masala omelette on the blog where I have added some spicy herbs as well as onion and tomato mixture to the omelette and made it in a different manner compared to this potato omelette.
Other omelette recipes such as cheese omelette too can be made in a similar manner by adding cheese to the omelet mixture and cooking like a pancake.
Any type of cheese can be used such as grated cheese into the mixture. While cooking the omelette make sure the cheese is properly melted.

How can we make the omelet fluffy?

It can be made fullfy and spongy by mixing and whisking the eggs for a long time until the egg mixture turns fluffy and frothy.
Adding cooked potatoes after whisking the eggs well makes the omelette extremely fluffy. The trick is to whisk well.