The potato fry recipe is a veg stir fry recipe and a common side dish in every Indian household made with diced or sliced aloo. A recipe that makes a good side dish in just a couple o minutes and is good to be served with flatbreads such as roti or phulka or paratha.

The aloo fry is a quick and easy stir-fried vegetable that goes perfectly well with roti or parathas.

It is simply made by giving tempering in the beginning by adding some cumin seeds, green chillies, curry leaves to the heated oil and then cooking thinly sliced potatoes in dry spices which are very basic.

Adding coriander powder and cilantro leaves is a mandatory step here as it gives great flavour and aroma to the simple fry recipe.

Here, I have used quite a few ingredients to make this everyday Indian aloo roast which is a favourite among the kids and goes perfectly as an accompaniment with rice and dal.

To make a potato fry recipe as is mentioned in this recipe, the potatoes should be thinly sliced in order to get the best taste and make the aloo cook well and soft.

Other aloo recipes that should be tried are aloo jeera, aloo sabzi, potato curry .

How to choose potatoes?

Always use small-sized potatoes as big potatoes taste a lot sweeter and are not suitable to make stir fry recipes.

If there is a lot of starch in the potatoes and taste a bit sweet then add some salt and lemon drops in water after cutting and placing the potato slices in water. Allow them to sit in water for 15 to 20 minutes before frying.

Strain the potatoes well before frying to get crispy stir fried potatoes.

Potato fry goes really with dal and rice too and it is a simple recipe with some basic tempering given in the beginning. Different regions give different tempering and yet the taste turns out awesome...

Potato is one such vegetable which can be made into various forms be it as fried, baking or curry or gravy or it also works as a great combination to many vegetables like beans, brinjal, spinach and also to non-vegetarian dishes like meat or sometimes in egg curries too.

Even the peel of the potato works wonders to clean up the kitchen stains and also good for removing dark spots of skin as well.

Lets take a look at the detailed recipe on how to make this simple yet delicious aloo fry recipe...

Tempering: I am using simple and most common tempering to the aloo recipe and that is the oil, cumin seeds, fresh curry leaves and some green chillies. These ingredients give an aromatic flavour and fragrance to the final dish.

Potatoes: Aloo in the form of peeled thin slices work well for this recipe as they can be stir-fried quickly whereas aloo cut in cubes takes a little longer to cook. I prefer thinly sliced potatoes but any size and shape can be preferred.

Spices: I am using all the basic spices from the kitchen such as salt, red chilli powder, turmeric powder, coriander powder to make the simple potato fry dish. 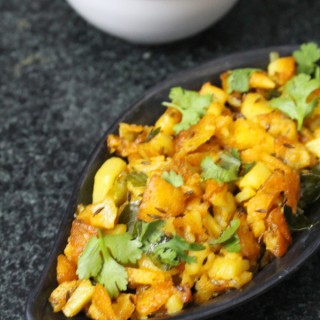 Cooking on high flame would burn the masala at the bottom of the base. Do not cook on high flame. Cook from medium to low flame.

Here, I have given a simple tempering and then stir-fried the potatoes in the tempering with the dry spices and main ingredient being the coriander powder which actually brings out aromatic flavor and serves as a good side dish to many main course meals.

However, there are several other ways this recipe can be tried to stir fry. The tempering in Southern part of the country is more such as by adding mustard, cumin, dried red chillies, curry leaves, onions and the the potatoes are stir fried in basic spices.

Another way is to boil the potatoes slightly and then stir frying the boiled potato cubes in tempering and spices.

Aloo fry is done in many number of ways and every recipe tastes good if the potatoes chosen are right.