Ambur Chicken Biryani is an authentic and traditional recipe from Tamil Nadu which is a dum style Ambur chicken biryani from the Ambur region. This ambur dum biryani is totally different from traditional Indian biryani recipes or Hyderabadi biryani. This is almost similar to the tahari recipe from Hyderabad with slight variations.

Other chicken recipes collection to check out are methi chicken .

Here, in this recipe I have used raw onions, tomatoes and yogurt and the biryani making method is totally different from the usual biryani which we regularly make...

I have already posted ambur mutton star biryani which I really loved making it and now I wanted to make this delicious ambur chicken biryani recipe and post it for my blog readers....

Biryani recipes do require patience as they take up lots of time but the end result is absolutely perfect and satisfying. I love to try out various style biryani recipes from different regions and post it on my blog and shall continue doing so as I keep updating...

I just hope my recipes are loved by my blog readers and do send your feedback and comments below regarding any doubts on the recipes that have been shared on the blog...I shall be glad to clear every doubt that is asked...

This ambur chicken biryani can also be made using a pressure cooker rather than placing on dum....however, here I have used traditional method of cooking and used a cooking pot to make the biryani... It is almost like the tahari recipe where I have used mutton to make it.

Note: In Tamil Nadu biryani is usually made with seeraga samba rice but, in other regions it can be replaced by basmati rice or ordinary rice which is handy at your place. 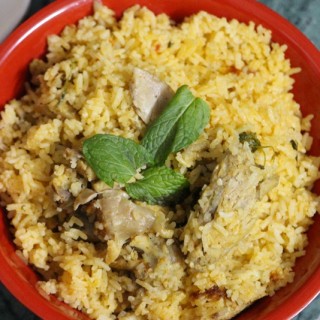 1.Red chilli powder too can be added in place of dried red chilli paste.
2.If basmati rice is used to make this biryani then soak it for about 30 minutes before adding it to the boiling water or add directly if plain ordinary rice is used.