Pakistani chicken biryani is an authentic way of making biryani and it has some different aromatic flavors due to the spices and herbs added in it.

I have always been trying various biryani recipes from different regions and countries and this is my another variation of biryani recipe which is made in pakki yakhni style.

This is a simple way of making the rice special dish by cooking the chicken first and then giving dum by layering cooked basmati rice and chicken curry.

I have used Basmati rice as the long grains give amazing aroma to the dish but one can use other rice variety as well such as sona masoori rice.

I highly suggest to give basmati rice as the first priority.

Other biryani recipes on the blog are: hyderabadi mutton biryani, hyderabadi biryani , how to make biryani which should definitely be tried.

How to make the recipe:

Firstly, fry the onions until golden brown and then cook the chicken in it by adding spices, tomatoes, yogurt and cook the gravy for about 20 minutes.

Separately, cook the rice by boiling the rice for about 10 minutes in boiling water.

Give aromatic flavoring of salt, whole spices such as cloves, cardamom, shahi zeera etc… and then the rice is boiled.

The boiled rice should be strained and added during the layering of chicken and rice.

The biryani pot should be sealed tightly after layering and then given dum for 5 min on high heat and 25 min on low heat.

Ingredients to make the recipe:

Oil: This is needed to fry the onions until golden brown and then the same oil is used to make the curry as well.

Sliced onions: Using thinly sliced onions to make the barista gives the actual flavor required to get in the biryani.

The onions should be perfectly fried until they get golden color. This is the one of the main ingredients for the recipe.

Tomatoes and Yogurt: These two ingredients are required to produce the masala gravy and also to give the right balance of sour flavor to the chicken curry.

Without adding these ingredients the biryani would turn sweet and less tasty.

Whole spices: To the chicken curry, one has to add various whole spices such as cloves, cardamom, cinnamon, black pepper, bay leaf and other spices of one’s choice.

The whole spices are essential ingredients of any biryani recipe as these give the spice aroma to the special rice delicacies.

Herbs: To get the right flavors herbs such as green chilies, coriander leaves and mint leaves are added.

Dry spices: These spices such as salt, chili powder, turmeric powder, garam masala powder are essential to every biryani recipe.

Rice: Preferably using basmati rice is suggested as it gives the long grainy texture to the rice recipe.

Ghee: This is an optional ingredient to be added during dum . If ghee is not handy, oil too can be used as a topping and placed on dum.

FAQ’S FOR THE RECIPE:

Can we skip aloo bukara?

Yes, it is not mandatory and can be skipped. It is added to give a tangy flavor to the gravy. Tomatoes and yogurt balances the tangy taste and if it is not available then it can be skipped.

Pakistani or Sindhi style of biryani recipes add boiled potatoes during the layering of biryani. It adds great taste to the biryani and also gives some uniqueness to the traditional style of making biryani.

Recipe card for pakistani biryani below: 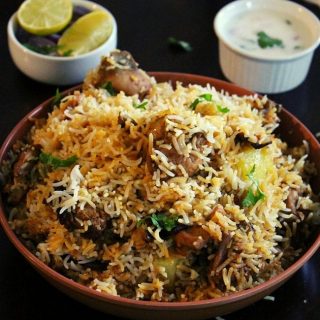 To make the curry:

To dum the biryani:

For the topping during dum:

To cook the chicken curry:

Cooking of the rice:

Layering the chicken and rice: