Chicken biryani recipe, made using the dum method by marinating chicken and combining it with half cooked basmati rice and giving dum by slow cooking until the biryani is nicely done.

The recipe has all the step by step details and a video procedure.

This is a special eid recipe to make for eid all across the world and also for several festivals, weddings and occasions.

TIPS TO MAKE A PERFECT BIRYANI

Biryani making in south indian regions like Tamil Nadu, Kerala is totally different from hyderabadi biryani and in Hyderabad usually, makes use of the dum method to make the biryani recipes...

In this biryani recipe, I have used the chicken, marinated it with some aromatic spices and herbs. The following step is cooking of the rice and adding the marinated chicken to it and giving dum.

The outcome of the recipe is as good as the restaurant style and what could be a better feeling than getting restaurant like flavors at home..

I have used common aromatic spices that are used in every household to make this biryani.

I have shared a delicious chicken biryani recipe using dum method which is very easy and tastes the best. I would like my blog readers to make this recipe for Eid and serve their family members.

How long chicken should be marinated?

The recipe can not only made during eid but also for various other occasions.

Chicken biryani is the most sought after dish all across the world and I thought eid is the best time to share this recipe.

I hope this wonderful chicken biryani recipe is loved by all of them and hope to receive feedbacks after trying out the recipe.

I have already shared other variations of biryani which are mentioned above with the help of links and would like to update many more biryani varieties as I keep posting.

Do check out the recipe details below and also the video procedure for chicken biryani recipe.

Finally I wish everyone EID MUBARAK!!! 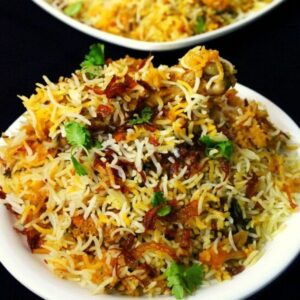 For garnishing/seasoning while giving dum:

What to do if rice during dum is undercooked?

What to do if I do not have saffron?

Just skip adding saffron flavoured milk and use any food colouring instead or just keep it natural. The biryani tastes the same but the colour of the biryani varies.

Can we avoid ghee and oil during seasoning?

Yes, all the ingredients added during seasoning can be avoided and directly placed on dum.

Why should we add oil in every step?

It is done to prevent biryani and the rice to become dry and keep the moist flavours intact after giving dum to the biryani.

Will my chicken cook during dum procedure?

Yes, the overall cook time for chicken is 40 minutes and since chicken is marinated it cooks even quickly during dum. Marination is also done to speed up the process of tenderizing during dum. The biryani is placed on dum for at least 45 minutes and chicken is easily tenderized during the same duration.

Do I have to cook the chicken separately?

No, the raw chicken marinade gets cooked completely during dum and releases all the flavors into the rice during the dum process.