Lucknowi biryani, a special and traditional method of biryani making from capital city Lucknow which is often made in shahi style using chicken or mutton.

Lucknow is always known for its delicious and amazing shahi delicacies which are always mouth watering and finger licking.

Today I would like to share a very delicious and different style of making chicken biryani in lucknowi style.

How to make Lucknowi chicken biryani?

It is almost similar to making pakki yakhni biryani but the only difference is in adding various spices and this biryani uses different whole spices such as nutmeg, mace powder which are commonly known as jaiphal and javitri.

The flavors are just mind blowing and taste very light despite adding many dry spices to it.

The procedure to make this biryani is in three steps. The first step is to cook the chicken into a gravy by adding spices and other ingredients such as onions and yogurt and the second step is to cook the rice. The third step is to making a layer of the rice and chicken and then garnishing it with color, onions, saffron etc…

This layered biryani is placed on dum for about 20-25 minutes on low heat before serving.

What is the difference between Hyderabadi Biryani and Lucknowi Biryani?

In the hyderabadi style, the chicken or mutton is marinated in various spices and herbs and then half cooked rice is placed over the marinade and the pot is placed on dum for at least 45 minutes.

This way of cooking lets the chicken or mutton and rice to cook perfectly and is often called as dum biryani or kachchi yakhni biryani.

In Lucknowi style, the chicken or the mutton is first cooked and rice too is half cooked and then the curry and the rice is spread by layering them together and cooking or giving dum for some time which gives a delicious and appealing outcome.

The flavor of this biryani is quite light and not loaded with spices and has got mild flavors and exceptional taste just by adding few basic spices and herbs. It is not too spicy and appears orange in color due to the orange color added while dum.

In Lucknow, spices such as nutmeg and mace are essential and saffron is also the main ingredient and lucknowi biryani is incomplete without these ingredients.

Additional ingredients that are added which makes the chicken curry special are milk, kewra water which gives an amazing aroma to the recipe.

Overall, both methods taste good and give amazing results and below I would be sharing step by step details on how to make this biryani which is unique and delicious.

Accompaniments made for biryani recipes:

Any biryani made always taste good with either or baingan masala , mirchi ka salan or gutti vankaya curry.

These gravy recipes are the best side dishes to be served with main course rice recipes mainly pulao recipes or biryani recipes.

Video on how to make lucknowi biryani:

How to make lucknowi biryani: 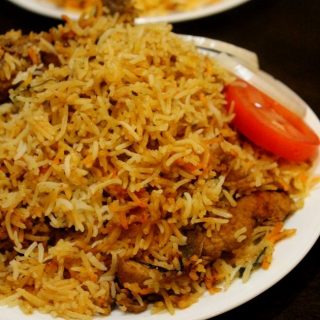 To cook the chicken:

To cook the rice:

Other main ingredients to give dum:

To cook the chicken gravy:

To cook the rice: