Hyderabadi veg dum biryani recipe is another authentic veg biryani recipe totally in dum style from Hyderabadi cuisine cooking in our traditional dum method. Vegetable biryani can be made in various versions and here I have made with an almost Hyderabadi way of making

This hyderabadi veg biryani or hyderabadi vegetable biryani recipe is a slowly cooking method where the preferred vegetables are stir fried and mixed with all the spices to make a sabzi masala, mixed with half cooked rice and placed on dum and this biryani is usually referred as tarkari ki biryani or sabzi biryani.

The vegetables to be used in hyderabadi biryani recipe are aloo (potatoes), carrots(gajar), peas(matar) mainly and apart from that other preferred veggies are cauliflower(phool gobi), and indian broad beans(seim ki phalli). All these vegetables have to be stir fried well in oil until the raw smell disappears.

Vegetable biryani can be made in various versions and here I have made with an almost hyderabadi way of making, that is adding the veg masala mixture at the bottom and adding the cooked rice at the top with seasoning and placing for dum.

The  biryani recipes can also be made by layering the rice along with cooked veggies too but here made without cooking the vegetable mixture.

I have made a similar kind of recipe by layering the biryani using mutton on the blog and that particular mutton biryani is made the similar way as this one.

This veg rice biryani recipe too follows a method where beaten yogurt and crushed onions are added into the veg masala and hyderabadi biryani recipes are incomplete without these two ingredients.

There are however 4 to 5 ways in which we can make biryani using vegetables so stayed tuned as I bring in many more ways to make these kind of recipes such as veg biryani in cooker which is a quick to do one pot pressure cooking method to make the biryani mixed with veggies.

Do follow the instructions in making Hyderabadi vegetable  biryani recipe step by step... 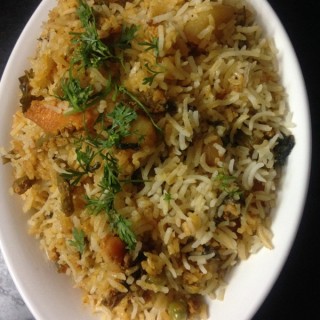 For the veg biryani masala mixture:

For seasoning the dum biryani:

For the veg biryani masala mixture:

Steps to give dum and season the biryani:

1.Add other preferred vegetables of one's choice such as phool gobi/cauliflower, soya chunks, paneer etc...
2.Adding oil in certain steps is very important and not doimg so makes the biryani very dry.
3.Soaking the basmati rice helps the grains to become longer in length while cooking.
4.Preparing the veg mixture without stir frying the vegetables gives a raw taste and it definitely does not give out a good taste to the biryani . If one is looking for a good taste then do stir fry the vegetables in oil.