Hyderabadi Chicken Dum Biryani is an authentic Hyderabadi special rice dish which is a popular Dum Biryani recipe of Chicken from Hyderabad served with kheera raita or cucumber raita or pyaz ka raita or onion raita and Hyderabad is famous for Biryani all across India.

I am sharing the traditional and authentic way of making Hyderabadi Chicken Dum Biryani straight from my kitchen without missing even a single step with every minute detail.

Biryani is very special to me and very close to my heart and  this recipe is something which is often made in every Muslim Household.

The Chicken Dum Biryani which I am sharing today is a very delicious recipe and the steps are so easy to follow.

Hyderabadi Chicken Dum Biryani is a very lengthy process but at the same time is the easiest. Once you understand it then you can master the art of making biryani of any kind be it a chicken biryani or mutton biryani or a veg biryani.

Chicken Dum Biryani is a slow cooking process and this process is very essential to bring the perfect flavors out of the dum biryani.

It is a Dum method and it is called so as the chicken marinade and the rice is placed inside the cooking pot and is tightly sealed with a chapathi dough and cooked by not letting the steam come out. By doing so the biryani gets cooked well and also keeps the flavors intact and therefore, its called as 'dum cooking'.

It is very necessary to use fresh herbs and freshly pound garam masala to bring out perfect flavors to the biryani recipe.

The biryani requires many ingredients but if added in sequence then one can never go wrong in making the biryani.

We  always make Hyderabadi Chicken Dum Biryani during gatherings and also during every occasion and is served with or Hyderabadi Mirchi Ka Salan Recipe or Bagara Baingan hyderabadi special.

Biryani is a must dish in every muslim wedding  food platter in Hyderabad and I would love to share this lengthy but an easy process with my readers to learn and relish this traditional hyderabadi dum biryani.

If you would like to make the recipe then plan out before especially if you are trying it out for the first time. Gather all the ingredients which are required to make this chicken dum biryani.

What other ways it is called as?

It is also called as a 'kachi yakhni biryani' as the chicken is not cooked and instead is placed for the dum cooking therefore, it can be called as kachi yakhi biryani or dum ki biryani.

The biryani which I am posting here in not too spicy and I have added very few whole spices and if you are looking forward to a spicy biryani then stay tuned and watch this space as I update with lots of biryani recipes with chicken, mutton and vegetarian.

Ingredients to make the biryani:

Oil: It is used to deep fry the onions as well as required while giving the dum and also while marinating.

Chicken: Chicken with bones and also tastes good with chicken legs and medium size chicken pieces with bones. Always clean the chicken with salt, turmeric water and lemon to remove any chicken smell from the flesh.

Whole spices: I usually add basic whole spices but additional garam masala such as bay leaf, star anise can be preferred but since this is Hyderabadi style I tried to keep it as authentic as possible.

Yogurt: It is one of the main ingredients used while marinating chicken and this gives the right texture and balanced sour flavor to the rice.

Fried onions: This is also called as birista, an essential ingredient to make biryani. Biryani making is incomplete without deep fried onions. I have shared the recipe of fried onions on the blog which can be checked if having any doubt while frying the onions.

Hara masala: This is a combination of green chilies, cilantro/coriander leaves and mint leaves.

Dry spices: These are required while marinating the chicken and make a difference to the biryani if not added. These dry spices are salt, chili powder, turmeric, black pepper etc...

Rice: Any rice can be preferred to make this biryani and both taste equally good.

Using them while making dum biryani gives a wonderful flavor to the biryani and my suggestion is to not skip adding them If any of the ingredients should be skipped then try not to add mint leaves if it is not available.

Below I would be sharing the detailed recipes of traditional hyderabadi chicken dum biryani recipe which has been a special dish of the Nawabs in Hyderabad and has been passing down from generations to generations and takes the first place in hyderabadi cuisine.

Video procedure for the biryani? 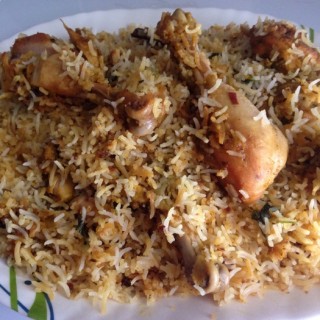 For The Chicken Marination:

Procedure To Cook The Rice:

Procedure To Give The Dum:

Procedure to take the biryani out:

Previous Post: « Fried Onions Recipe(birista), How to fry Onions For Biryani
Next Post: Phulka Recipe, How To Make Phulka »