Chicken jalfrezi, a simple and quick chicken recipe made under 30 minutes with minimum requirements. This is a boneless chicken strips recipe that requires soya sauce to make it more flavorful and aromatic and topped with tomato, capsicum or any diced vegetable such as onion to get a crunch.

This is a chicken starter but there are other chicken recipes posted on the blog ranging from snacks to main course dishes such as chicken gravy, chicken popcorn, chicken tangdi etc...

This recipe is extremely simple and can be made in few minutes and the only necessary things required to make it are boneless fresh chicken and sauces.

It also needs to have some veggies such as onions, tomatoes and any capsicum or bell peppers of any color (red, yellow, green, orange).

The sauces that are used in the dish are soy sauce and tomato ketchup but if the ketchup is not handy then tomato sauce does work well as both taste equally good for this recipe.

I have used chicken which has no bones and then stir fried the boneless chicken in little oil until it gets tender and since it is boneless it gets tenderized in 10-12 minutes.

The next steps are to saute the chicken by stir-frying a few veggies and then sauteing in the mentioned sauce which releases great flavours out of it.

How popular is this recipe?

Nowadays, the chicken recipes that are made in India are going global because of the wide spread of social media.

There are many chicken recipes that are highly made regionally such as chicken rezala and this chicken jalfrezi which are quite popular in bengal region but now is widely to other parts of India.

The term jalfrezi is said when non veg ingredients such as chicken or mutton are sauteed with a combination of onions, tomatoes and capsicum as these are made into cubes and then added to the main ingredient which lifts up the flavors of the dish.

This a semi gravy dish which can be eaten with paratha or naan or rumali roti. It tastes good with flatbreads such as chapati or slices of bread of any kind.

Can chicken with bones be used?

Since it is a dish that tastes best with roti kind of breads it is better to use boneless chicken rather than going for chicken with bones.

Check out the recipe below to make the jalfrezi using chicken and sauces.

Step by step photos and procedure

To stir fry the chicken 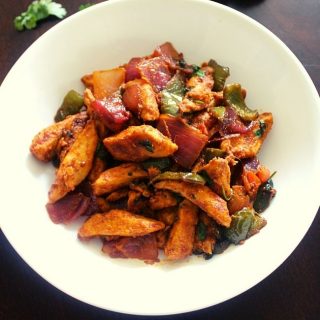 To saute the chicken:

To stir fry the chicken:

It is a simple method of stir-frying vegetables or chicken or mutton in sauces such as soy sauce and ketchup/sauce along with some diced onions, capsicum and tomato cubes. Tossing meat and veggies in onions,capsicum and tomatoes along with sauces gives a saucy stir fried flavor which is good if served with roti, naan etc...

Can we make jalfrezi other than using meat?

Yes, usually for vegetarians it can be made using paneer as well and it gives an amazing taste.

Is it a spicy recipe?

It is definitely not spicy but one wants to make it spicy then adding red chili sauce along with soy sauce and tomato sauce/ketchup would be advisable.

Difference between jalfrezi and korma?

Jalfrezi is made using sauce and vegetables and here cooked chicken is stir fried in sauces whereas korma is totally different as the main ingredient such as chicken or mutton is cooked in rich masala paste of fried onions, cashew nuts and yogurt.