chicken gravy recipe for rice, a masala gravy with onions, tomatoes and nuts paste cooked with chicken. This is a heavy gravy chicken that has many ingredients that go into making it and is a perfect gravy for rice, chapati, roti or paratha or parotta.

This gravy is neither sweet nor spicy and has a very balanced flavour and the texture is just perfectly suitable to be eaten with indian flatbreads.

To make the gravy we make use of sliced onions which are basically made into brown and then we use puree of tomatoes.

The gravy also uses paste of nuts such as almond, cashew nuts and desiccated coconut paste which makes a good gravy of the curry. I have cooked the chicken in rich masala gravy and in the end also added some sauce to add spice flavors but they are totally optional and can be skipped.

Onions: Here, in this gravy, we make use of onions that are sliced finely and which are cooked until brown and not transparent onions.

Tomatoes: Tomatoes here are blended well into a puree and added which gives the main base to the gravy and also adds to the sour flavour of the curry.

Cashew nuts: These are commonly called 'Kaju and are highly used to make creamy and heavy gravies which are shahi and here to make a dish apt for roti or paratha I have made use of Kaju in it.

Almonds: These are commonly called 'badam' and are usually used in gravies to get a delicious and Mughlai flavour to the curries be it veg or non-veg curries.

Coconut: In the gravy, I have made use of desiccated which is slightly roasted along with Kaju and badam to get rid of the raw smell in the gravy. Do not use more amount of coconut as the gravy becomes a bit sweeter.

Spices: I have made use of basic spices such as salt, red chilli powder, garam masala powder, kali mirch powder, coriander powder, ginger garlic paste which form the main base of the gravy in Indian curries.

Sauces: This gravy is made in such a way that it can be useful to make during special occasions and therefore, I have made use of special ingredients such as sauces to make it richer.

The sauces that have been used are red chilli sauce, green chilli sauce and tomato sauce which completely gives the gravy a flavour that could be used to make during weddings or during festivities. However, the adding of sauces is not mandatory and can be skipped to get a rich gravy taste.

Other ingredients: Red food color is added to get red color gravy and it can also be replaced with Kashmiri red chili powder which gives an amazing red color to the gravy.

Note: Here, I have used puree tomatoes, but tomatoes can be replaced with a cup of yogurt/curd which makes a yummy substitute and also makes the gravy super delicious.

Check the step by step details for the recipe procedure and also do check out the video process to make the yummy gravy.

Step by step photos and procedure 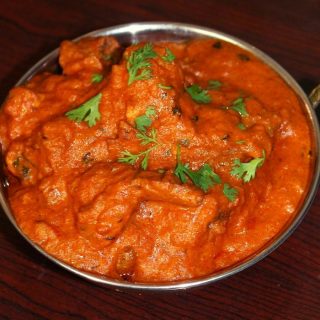 Can we skip sauce?

Yes, the gravy can be made just by adding kaju, almonds, coconut paste and tomato puree and cooking chicken along with the masala. It gives a delicious gravy to the recipe. The sauce is totally optional and can be skipped.
Is it necessary to dry roast the coconut, kaju and almonds?
Yes, roasting gives a good aroma to the gravy and the gravy does not taste raw.

Should tomatoes be added only as puree?

No, tomatoes can be finely chopped and added in place of tomato puree. Adding chopped tomatoes too gives a gravy texture as they get pulpy along with the chicken. This is an Indian style chicken gravy and the tomatoes can be altered and replaced by yogurt too and this replacement too gives a delicious rich gravy.

Does the gravy taste sweet or slight tangy?

The gravy gives a balanced taste of a normal curry but if the ingredients that are added such as cashews and almonds in more quantity can make the gravy a bit sweeter. Adjust the quantity of sweet dry fruits such as cashews, almonds, coconut etc...

Can we use fresh coconut?

Yes, fresh coconut too can be added in place of dry coconut.

To get a rich flavor and taste I have added dry fruits and also to get a creamy gravy but one can skip adding them and just add kaju/cashew nuts or just add almonds and still get a delicious gravy.