Irani chai or Irani tea is a Hyderabadi special dum tea made using reduced milk and tea concentrate. The tea gives a creamy texture while drinking and after biryani, Hyderabad is famous for its special chai with biscuits. The process takes a while to get milk into its reduced form but the end result is just awesome.

The Hyderabadi dum special chai is famous as the biryani is and this chai is also made using the dum technique similar to how the biryani is made. The process is simple to make at home and does not require much hard work.

In the hotels, they use big utensils which are exclusively designed to make the Irani chai but the same cannot be replicated at home as it is hard to get such large utensils.

Therefore, making at home in a simple manner and trying to recreate the drink at home which is loved by every Indian. The chai needs two separate cookpots to make, one for reducing milk and the other to make the tea concentrate.

Boiling separately and combining in the end to make a strong flavorful chai is the main technique in making this dum tea. The tea powder used to make this tea is different and can only be found in Hyderabad but since we are making it at home, it is difficult to get their secret tea powder.

Normally, good flavorful and taste giving tea powder is enough to make a good milk tea. Check out the list of ingredients used in making this special kind of Irani chai, a popular tea in Hyderabad.

Milk: The chai made is a milk tea and therefore, making use of milk is highly an important part of this Iranian tea. Using full cream milk or full-fat milk or buffalo milk gives a delicious taste to this chai.

black tea leaves: Using tea leaves to make the tea concentrate gives the perfect chai flavor. The tea leaves normally used in Hyderabad are special chocolate flavoured tea powders that are available there in local markets along with other tea powders.

Sugar: To get the right amount of sweet flavour, adding sugar is highly recommended.

condensed milk: Using condensed milk and cream/khoya gives a creamy flavour to the chai but if at least one ingredient is to be added then it should at least be a condensed form of milk to get the required flavours at home.

The tea should be brewed separately for a while with special Iranian chai tea powders which are hard to get everywhere other than the traditional local markets. Use whatever good quality tea powder is available handy but brewing the concentrate well with sugar is a must.

The cardamoms can be added to milk and tea concentrate for a strong elaichi flavour. The milk can be thickly reduced if condensed milk is not available. Just brew tea separately, reduce the milk separately, strain the tea and add top it up with thick reduced creamy milk and serve with biscuits.

The tea is put on dum for hours and sometimes throughout the day as there is a huge demand for tea not only in Hyderabad but throughout India and this process of making tea goes on for the whole day.

Making at home is not a strenuous task and making it quickly with some milk and tea powder is enough to get a taste at least that is 80% as close to the chai available in Iranian tea stalls.

Can we store tea?

Tea should never be stored either for hours or in the refrigerator. It turns out bad and gives a unique taste and releases harsh chemicals into the tea. Always make a fresh form of milk tea and consume the tea as quickly as possible.

Making fresh tea during evenings or winters or during mornings and enjoying them with either biscuits or pakoras is the best way of enjoying tea or chai. If looking for restaurant kind of chai recipes then do try starbucks chai tea latte that is made as per the American style and also iced chai latte starbucks style.

add 2 cups of water to a saucepan.

Cook the chai concentrate for at least 20-25 minutes.

add 2 cardamoms/elaichi to the milk.

Bring the milk to a boil. Keep stirring in between.

Let it simmer until milk reduces to half.

Add 1 tablespoon condensed milk or as per sweetness preferred.

Stir well for a minute.

Pour the chai concentrate until half cup.

Pour the reduced milk over the chai concentrate. 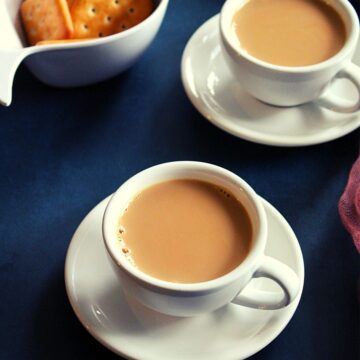 Why this chai is so famous?

It is because it has a creamy and milky texture and favour that no other chai India gives. Normally, teas are made mostly by using water and just a little milk is added in the end but this chai gives more milky flavours that makes it more special.

Why is it called Irani chai?

It is a Persian tea basically which has been brought by the workers when they were travelling to India in search of work and by the time they reached Hyderabad, it became hugely popular.

Is it a healthy tea?

Drinking a cup of tea or at least twice a day does not cause any health issues and it gives a refreshing feeling and acts as a stimulant after a tiring day. Having it more often is not a good idea but 2 cups a day can be refreshing and makes the day productive.