Mutton Dum Biryani Recipe is again a different variation of mutton biryani where the mutton is dum cooked and is almost similar to Hyderabadi Biryani. The dum biryani here is kachhi yakhni style of making biryani which does not require a long time to marinate. It can be quickly made with a short marination time using meat tenderizer such as raw papaya paste.

What is mutton dum biryani?

The recipe follows a method of adding marinated mutton at the base of a cookpot and over the mutton, a layer of half cooked rice is added and the whole set up is placed for dum that is cooked inside steam.

This process takes about 50 minutes to 1 hour for the mutton to cook well inside steam.

The dum is slow cooking process where the rice and the mutton are cooked slowly inside steam which release aromatic flavors into the rice and mutton during the process of cooking.

This biryani recipe is cooked with the help of the dum or steam but here long marination is not required and placed on dum with the pot tightly sealed.

Here I have used raw papaya paste to tenderize the mutton and did not marinate the mutton for a long time. The recipe requires less time as meat tenderizers help in cooking the biryani fast and selection of fresh red meat is very important for perfect biryani and fresh biryani.

In my hyderabadi mutton biryani , I have not used the tenderizer and marinated meat for a longer time but not everybody can wait for such a long time to cook.

So here is the quick recipe that just requires a tenderizer and the biryani is done without any difficulty .

Biryani recipes be it chicken or mutton can be made in various ways and in hyderabad for dum method we say as kachhi yakhni biryani or kachhe gosht ki biryani and if the mutton is cooked before to make biryani then it is called as pakki yakhni biryani.

Yakhni is the mutton marinade or the masala gravy in the biryani.

Biryani is all about spices and flavor and a mix of many ingredients. Biryani making appears to be a long process but I feel making biryani is the easiest and simple once we get hold of the technique in making it.

Important tips to be noted:

This dum biryani recipe which does not require patience and can be cooked quite easily just with the help of a tenderizer that is raw papaya paste.

If tenderizer is not added and directly placing the biryani for dum makes us struggle to tenderize the meat. So while making mutton biryani in dum method there are certain points that should be kept in mind.

Follow these tips for long grain and flavorful rice:

FAQ'S FOR THE RECIPE:

How to make papaya paste?

These are available in markets very easily or raw papaya can be peeled, grated and added to the mutton while marinating.

The meat tenderizer makes the mutton so soft that the mutton pieces just melts in your mouth and this is the most similar way of making dum biryani in restaurants and you can buy meat tenderizers from market if raw papaya is not available.

Which meat is best for biryani?

Preferably it is better to go for goat meat with bones such as shoulder meat or leg section with meat and bones. Using boneless is not highly preferred as mutton that has little bones give juicy flavors.

Is meat healthy or unhealthy?

Eating meat in a balanced way and including other kinds or food in balanced diet is essential. Over eating of meat regularly may cause harm to a human body. 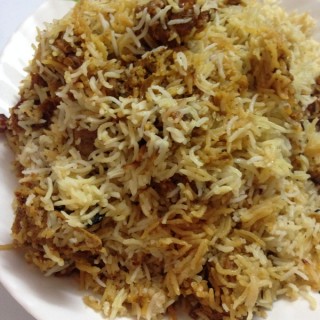 Other ingredients (Seasoning the Dum):

For The Dum Procedure: