The biryani is a quick tomato mixed rice made using whole spices and is one of the simple lunch box rice recipes that can be carried anywhere.

It is a one pot dish which can be made under 30 minutes just by using pressure cooking method. It is a common south indian biryani made using tomatoes and these are usually referred to as “thakkali” in tamil nadu region of Southern India and hence is called as thakkali biryani.

How to make the biryani:

The biryani is made by soaking basmati rice for about 25 minutes to 30 minutes and then mixing in the tomato gravy which is made by adding whole spices in tempering and then using onions, tomatoes, yogurt and making a good gravy.

Oil: Oil is used as base to make any gravy and using olive oil is a more healthy option but other oils such as vegetable oil or any edible oil would do better.

Whole spices: Garam masala such as cardamom, cinnamon, cloves, black cumin or shahi zeera, bay leaf are all used as whole spices to give a flavorful aroma to the biryani rice.

Onions, tomatoes: If making a one pot biryani then using onions and chopped tomatoes to get a good gravy and to make a good masala is essential and are the main ingredients in making a veg rice recipe.

Yogurt: dahi or yogurt gives a slight sour flavor to the rice and these are the main ingredients in making a one pot biryani and adding good amount of tomatoes gives a good color and main flavor to the thakkali biryani.

Peas: Any veggie can be added to make this biryani but since this is exclusively made as a tomato biryani, I have added only few veggies such as matar/peas, tomatoes chopped.

Other veggies such as diced potatoes, chopped carrots can be addedas optional veggies but onions, tomato and dahi is very essential.

Coriander and mint leaves: These herbs are added as every biryani is incomplete without using these fresh herbs and these give a good aroma to any biryani recipe.

Mint should always be added in moderation as adding many leaves gives a very minty flavor and dominates the rest of the flavors.

Which rice is best to make:

Here biryani tastes good by using basmati rice and I have used the same in this biryani but any rice can be used such as sona masoori or ordinary available rice but it is always a first option to use basmati long grain rice but any rice recipe can be made using ordinary small grain rice as well.

It tastes best with raita or any veg gravy can be served along with it.

Which tomatoes to be used:

It is best to use red ripe tomatoes for better flavors and tomatoes are always available easily in India and other countries too and all the ingredients that are used to make in this recipe are easily available in every place.

The biryani can be made in pressure cooker but should not be given more than 2 whistles on high flame and it can also be slow cooked just by slow cooking the rice once it has been added and then cooked until done. 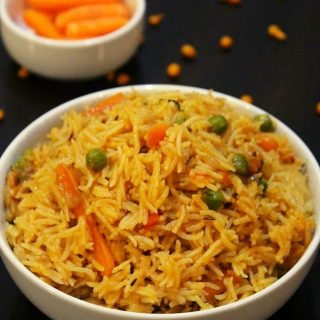