Paneer pulao or paneer rice is a simple flavored rice delicacy made using indian cottage cheese and is a delicious rice dish made with basmati rice and cottage cheese.

Paneer is a huge chunk made of curdled milk which is made into a thick chunk by removing all the water from the milk that is curdled and then cut into cubes which are then used in many north indian recipes which taste amazing by adding paneer (cottage cheese).

The paneer is a highly common substitute for non veg food such as chicken and mutton and replacing paneer or cottage cheese in place of any non veg gives almost a similar taste as given for a non veg dish.

Paneer is usually added to many gravies and also to any rice recipes. Paneer is a simple ingredient used to make many special recipes including gravies, kababs, rice recipes, koftas, curries etc…

Paneer recipes on the blog:

I have shared some of the paneer recipes on the blog and every paneer recipes has turned out to be extremely yummy such as paneer tikka masala, paneer butter masala, matar paneer, palak paneer, chilli paneer and now this paneer rice and all these are simply amazing recipes made using paneer.

I would like to update many more paneer delicacies in future as I update.

This is a simple paneer rice pulao made by stir frying the cubes of paneer in some oil and then adding to the tempering.

The tempering is initiated by heating some oil, adding whole spices such as bay leaf or tej patta, cardamoms, cinnamon, cloves and then adding onions which are cooked until they turn translucent and then adding some veggies, spices, herbs and pressure cooking the basmati rice by adding water.

In this recipe I have added veggies such as matar or peas to the paneer pulao which gives a different color to the rice as well added some chopped carrots to give the rice dish a colorful look.

To pressure cook or slow cook?

Both methods give good results by following some good tips while making them in any method.

Tips to use paneer:

While stir frying just slightly fry the paneer in oil and not for a long time. The longer paneer is cooked, the harder and chewy it gets therefore, just saute it for few minutes on all sides and remove quickly.

What can be served with paneer peas pulao:

Also there are other pulao recipes or rice recipes on the blog such as egg pulao, bagara rice, tomato biryani, tomato bath, vegetable pulao etc…

Check out the recipe below which is simply made by giving tempering, adding whole spices, paneer, peas, pulao, carrots, rice, water and pressure cooking everything together. 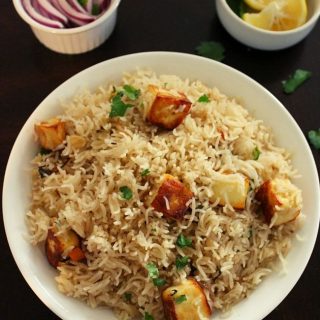 Making of the pulao: