Baigan ki sabji is a veg curry cooked using brinjal commonly known with different spellings like baingan, baingan etc. It is also called eggplant and aubergine in different places. Brinjal is usually called in India and it is known to us as the 'king of all the vegetables'.

It is large and can be made in various forms like it is used to make brinjal curry, vankaya fry, brinjal fry and there are several hundreds of ways this vegetable can be made use of.

I would like to share with my viewers several other ways of making recipes using brinjal or baigan or baingan.

Here, this baigan ki sabji is made in the simplest way and also it is made just using baigan and I have not added any potatoes to it.

There are many ways in which brinjal appears like some appear round and purple, some have elongated shape and appear large and huge in size.

In India we get plenty of brinjals and every brinjal is useful in making several recipes.

It is also used in sambar recipes, rice recipes and many curry related recipes.

Brinjal is often not liked in taste as the taste of the vegetable gets bitter and different if not used properly.

There is an important point that should be noted while using this vegetable and that is always put the cut brinjals in salt water or sprinkle salt all over the baingan pieces inorder to avoid the bitter taste after cooking.

One should always look for fresh brinjals and we can make use of green color baingan or violet color baigan to make our recipes.

It is made using basic spices and sliced onions and tastes good with either roti or rice. Baigan ki sabzi is pressure cooked here and has a slight gravy texture which is perfect to serve with rice too.

Below is the baigan ki recipe made in a simple and quick way made just using brinjals. Here, I have used only ordinary small round brinjals and we can use long brinjals or the green brinjals too.

Using any kind of brinjal gives us a good taste and also the same procedure can be followed to make this sabzi. 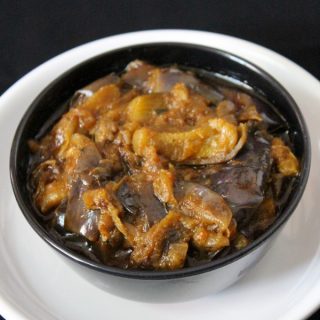 1. If willing to add more aromatic flavors into the curry, we can also add a pinch of crushed kasoori methi or some fresh methi leaves and cook for 2-3 minutes at the end.
2. Here, we can also cut and add potatoes if one is interested in combining both the vegetables as the combination of aloo and baingan is amazing.
3. I would like to post another recipe of aloo baigan ki sabzi as a separate recipe as I keep writing down recipes.