Brinjal curry is a traditional south Indian curry shared along with a video procedure... It is a veg curry gravy recipe made using eggplants and is similar to other veg curries. In south India it is commonly called 'vankaya koora' and it is a common and basic curry made to be eaten with rice.

Other curry or sabzi related recipes on the blog to be tried including veg and non veg  are matar paneer, paneer butter masala, paneer tikka masala etc.

This gravy brinjal curry is made to be eaten with rice rather than roti.

Brinjal is also called as aubergine. In markets, there are different kinds of brinjals/eggplants available. Any kind of brinjal is used to make this curry.

Many make this curry with different variations and I have preferred to keep it simple that is suitable for my blog readers from all across the country.

Eggplant is the king of vegetables and number of delicious recipes can be made with this veggie.

We usually make brinjal fry or in the form of vankaya pachadi/brinjal chutney.

This is a basic indian veg curry that is made in onion tomato masala gravy and into it added is eggplant which forms a thick gravy perfectly suitable to be eaten with steamed rice.

However, one thing that should be remembered while making any brinjal/eggplant curry is that it should be washed really well.

How to wash brinjals before making this curry:

Cut the pieces first, and check if there are any worms present inside.

If worms appear discard the brinjal.

If it is white and clean inside, cut them into desired pieces, add them in water mixed with salt.

After adding all the cut pieces into salt water, do not strain the water unless they are added into the curry.

Take them out only while making curry as they discolor easily once they are taken out from salt water.

Keeping in salt water does not change the color of the cut brinjals. 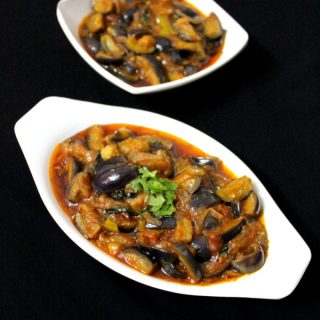 1.In this recipe, to make brinjal curry, I have added methi leaves which really enhances the flavor of the dish however, it is totally optional to add and can be skipped.
2.Not adding methi leaves also gives us a flavorful brinjal gravy curry.