Paneer tikka masala, a mouthwatering gravy recipe made using paneer cubes and a very shiny onion tomato gravy along with some cashew nuts and creamy gravy. This recipe is a gravy masala which can be served with roti recipe, aloo paratha, naan or poori.

The masala is a restaurant like masala which uses good number of spices and some cream that gives a good shine to the gravy and looks good in appearance too.

The masala gravy has a good aroma that comes due to adding fenugreek leaves or kasoori methi which is a good aromatic ingredient which completes the dish.

It is a very popular north indian dish mostly found in north india and in several occasions of northern India and a popular menu item in veg restaurants.

Paneer has lots of health benefits and it is a dairy product which has got high amount of protein and these have good amount of calcium which is good for bones.

The paneer cubes are marinated by using curd and spices and it has a pleasant aroma because of kasoori methi added into it.

Do check out the recipe for paneer tikka masala gravy below. 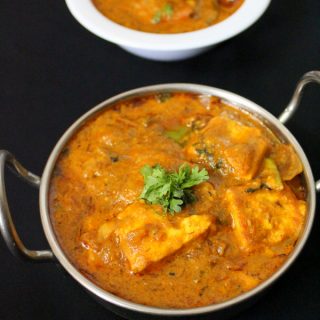