Also other chings recipes to be used are chow mein recipe...

The gravy here can be obtained by using a ready made and instant ching's masala which makes our work easier and which helps in reducing the spices we are using.

The spices used here are nothing but just the chings chilli paneer masala with which the whole recipe can be made in a couple of minutes.

Traditionally indo chinese recipes are made using various spices and sauces and it takes a little more time to make it in regular method.

This masala eases our work and does not require to add salt as well.

If one is in a hurry and if one is willing to eat indo chinese cuisine then, one need not go outside to have it and easily make it at home.

I have already shared chilli paneer recipe using various sauces and which is generally made in fast food stalls but this particular recipe is made directly by sauteing the vegetables, adding the paneer cubes, paneer chilli masala mix and cooking the gravy for few minutes and its done. 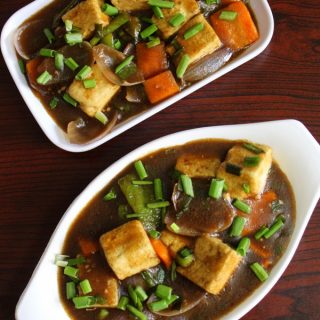 1. Here in this partcular recipe of desi chinese, one need not add anything else other than the paneer chilli masala.
2. The masala contains salt, spices and the required sauces that go into the traditional chilli paneer recipe.
3. Here, I have added paneer cubes, however, paneer can be replaced by fried boneless chicken pieces too and relish it as chicken chilli.