Chow mein recipe is a veg hakka noodles recipe made using instant ready made masala by adding the masala in sauteed vegetables and boiled veg hakka noodles. This is a quick chow mein made using ching's secret masala and do check out other recipes such as ching's chicken 65...

This is another quick indo chinese recipe made using a secret masala that is ching's secret veg hakka noodles without adding salt, spices or any sauces into the noodles recipe.

If looking for making indo chinese recipes without using these ready made masala then do try chicken manchurian, chilli chicken, chilli paneer etc...

Making of this recipe hardly takes 10 minutes and it is a good snack or breakfast recipe for the kids.

It tastes good when its hot and also tastes best when served with any manchurian gravy or any chutney or sauce like schezwan sauce or schezwan chutney.

There are many kind of noodles available in Ching's brand and all the grocery stores sell their products and making noodles is not a big task if noodles are easily available and handy.

There are many kind of noodles and they can be made in many various ways like egg noodles, veg noodles, hakka noodles, chicken noodles, schezwan noodles etc...

Generally speaking chow mein recipe takes in ingredients like oyster sauce and soy sauce but here, the ready made masala has all the ingredients readily available in the masala which gives almost the same flavor as obtained by using the sauces.

The masala makes our work easy and one does not need to use too many ingredients and just adding the masala to the boiled noodles makes our work easier and it can be made in just few minutes by using veggies that are easily available in every kitchen.

Below are the recipe details on how to make simple and easy chow mein using vegetables and hakka noodles.

How to make chow mein recipe: 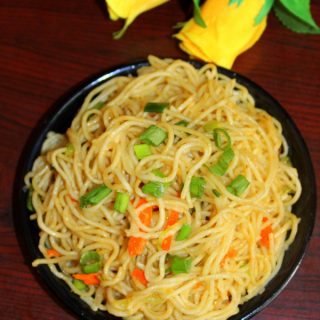 Boiling of the noodles:

1. Here, I have added julienned veggies and made veg chow mein but, one can also add fried boneless chicken pieces as well and have it as chicken chow mein.
2. If the masala added is less spicy then, I would suggest to cut and add one more packet of chings's secret veg hakka noodles masala to make it more spicy.
3. The recipe does not require any extra ingredients other than the masala and the ready made masala has everything in it including salt.