kaddu ki kheer is a hyderabadi special dessert made using milk and kaddu. This can also be called as lauki ki kheer and kaddu is a term for lauki in hyderabadi lingo.

It is a special dessert and a favorite of every muslim made in every hyderabadi household.

It is a very rich, delicious, creamy dessert loaded with heavy ingredients and is one of my favorite desserts. It takes in a lot of time to make this dish in a traditional manner.

It is usually found in many occasions like muslim ceremonies or weddings in hyderabad. I have tried to share the details of almost the same kind of kaddu ki kheer recipe made usually in hyderabad.

Being a hyderabadi I am quite familiar with the ingredients that go into making this wonderful and amazingly delicious dessert.

Its a bit time consuming process to make this dish, we need to get ready with all the ingredients readily available before making it.

Though it takes time, the outcome of the dish pays off.

1.Cook the bottlegourd by adding little water and make it soft as it takes time to get cooked in milk.

2.To make this recipe we need to first soak the sabudana for few hours until it bulges out and gets soft. Soaking sabudana reduces the time of making kheer.

3.Soak the basmati rice for an hour, drain it completely, dry the rice and then coarsely powder the rice. This step too reduces the cooking time of kheer.

4.If dry fruits are to be added, blanch them in water, peel them and slice them finely to garnish at the end.

5.These are main ingredients and if used in this way , they reduce the time of making the kheer recipe.

Rest of the making procedure is very easy if instructions are followed carefully.

How to make kaddu ki kheer: 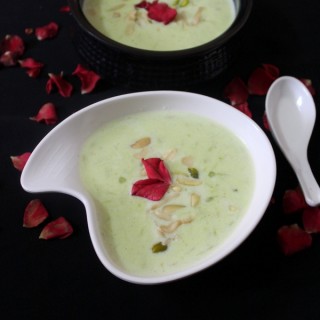