This pao bhaji was earlier famous in only Maharashtra but now it can find its presence in almost every state of India and people crave to eat this recipe as it is a very delicious street food as well as a very filling recipe.

It is mostly preferable to have it during the monsoon season or during rains with hot bhaji and pav. It is mostly sold like hot cakes during winters and rains in every Indian street corner.

Pav bhaji is very easy to make recipe at home and many of us who are not from Maharashtra and crave for pav bhaji can easily make this pav bhaji following simple steps shared in this recipe post.

It is easy to get pav bhaji masala if we live in India and many brands sell pav bhaji in Indian grocery stores as well as the masala is easily available in every super market or hyper markets.

If one lives out of India, it is better to find pav bhaji masala in Indian grocery stores and I am sure it would easily be available in Indian stores abroad.

We can make the bhaji with basic veggies that are anyways available all the time in our kitchen pantry like tomatoes, onions, peas, potatoes etc...

We can also make use of other veggies like cauliflower, cabbage, green capsicum to make the bhaji for pav bhaji.

However, one need not waste time and energy in making the masala at home, since it is available in plenty in all the super markets and also it is a common masala that is sold in every grocery store...

I have shared a video procedure above to make us understand better about how can we make pav bhaji and this is the best pav bhaji recipe that we can ever find anywhere on the internet and it is an extact replica of street food mumbai style pav bhaji.

Check out the details and directions below on making pav bhaji

How to make pav bhaji recipe: 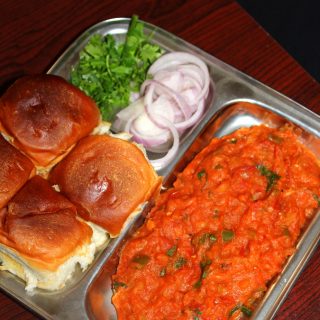 To make the pav bhaji:

To toast the pav:

For garnishing the bhaji:

To make the pav bhaji:

1. Pav bhaji is all about using butter generously and if one is health conscious and not fond of street food then I suggest to reduce the quantity of butter while making pav bhaji.
2. Adding food color is optional and if does not have food color handy then skipping the ingredient does not change the taste of the dish and only the color of the dish does not appear red.
3. If one wants to achieve street food color then adding good amount of red food color gives us the street style pav bhaji color.
4. I have however added less amount of butter and if one wants to get the shiny texture in pav bhaji then, it can be obtained by using more amount of butter while cooking the bhaji.
5. I have used a masher to mash the veggies evenly. If one does not have it handy then mash the matar separately using a spatula or hands and also similarly mash the boiled potatoes using a spatula or make use of hands before adding into the curry.

Nutrition Facts
pav bhaji recipe, how to make pav bhaji
Amount Per Serving
Calories 340
* Percent Daily Values are based on a 2000 calorie diet.
WANT TO WATCH VIDEO RECIPES?SUBSCRIBE US ON YOUTUBE

If you like this version of pav bhaji recipe, do leave us your feedback below in the comment box and also do share your feedback on how this recipe turned out and also do not forget to follow us on our social media handles to know about the lastest recipe updates...