Other maharashtrian recipes that are available on the blog are methi bhaji, namak pare etc...

This bhaji is often eaten and served with in south india, but in maharashtra region it is usually served with chapati or poori.

About potatoes and bhaji

This bhaji recipe is also used in making masala dosa and can be eaten with any roti recipe.

Potatoes can be used to make several curries, gravy recipes, sabzi recipes and this aloo bhaji is made by boiling potatoes and sauteing them in spices.

This is a very common side dish down south and north. This curry is nothing but a common potato masala for dosa that is usually made and added on masala dosas.

Here, I have made it in such a way that it should be served with rotis too and pooris as well.

It is made by first boiling the aloo, after boiling the potatoes should be peeled, mashed and cooked in aromatic tempering on spices, curry leaves and onions.

Aloo is one such vegetable which is a favorite amongst the young and kids etc...

Aloo can be made into several interesting recipes which are made into endless recipes and this is one such wonder vegetable which can be combined with several other vegetables that are available in our kitchen and made as mixed veg curries too.

This is the most simplest of all aloo recipes and quick to make as early morning side dish recipes for poori, chapati or dosa, uttapam etc... One can even serve this batata bhaji as a side dish to rice too but along with some other curries like dal etc...

Below I have shared the recipe details on how to make this potato bhaji and make a quick and easy aloo recipe in our day to day life. 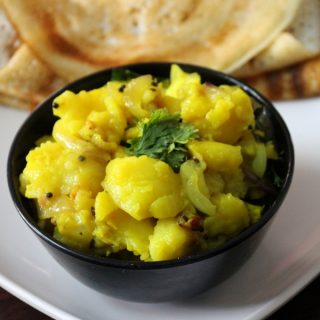 For cooking the aloo bhaji: