Turmeric milk recipe or Haldi doodh, simple and easy turmeric milk made to cure cold, cough as well as a good drink to have during the winter season or during the rainy season. Turmeric appears as yellow or deep yellow chunks that have an orange-yellow colour inside and appears to have a slight orange colour or yellow when ground into a powder.

I have posted many turmeric related recipes which are good for health and also some of them work as weight loss drinks such as turmeric water, turmeric tea recipe, lemon water, ginger water for weight loss.

Turmeric milk is an amazing drink recipe made with turmeric, black pepper powder added in warm milk and mixed.

It is a healthy drink passing down over the years and is a soothing drink to the throat.

It is said to relive a person from cold, cough and other throat related issues...

There are also some interesting recipes that use milk in them and are healthy such as badam milk, dates milkshake, fruit custard recipe which are a bit nutritious to our diet...

When to consume this milk?

When we were children and young we were given these immune booster drinks and not feeling the need to go to the doctor.

These drinks would work wonders and would give results in just a couple of days.

Benefits of drinking this milk

How does each ingredient helps in cold and congestion?

Below I would like to list down some of the important benefits of turmeric which could be useful in daily life.

Below I would be sharing a simple remedy recipe which helps boosts the immune system and make us feel relived in the coming months of monsoon and winters.

Hope this recipe works wonders to my viewers and brings amazing results.

Note: Too much of cold and flu could also indicate various other problems and if symptoms persist then one should definitely go see the doctor as this remedy could work only if the symptoms are mild and for not with severe symptoms.

How to make this turmeric milk?

It can be made in several ways but here I am sharing one of the common methods to make it.

It uses milk which should be boiled, add some turmeric powder, black pepper powder and stir well.

Let the drink reach to a lukewarm temperature and it can be consumed before bedtime.

Follow the step by step details below to make the recipe. 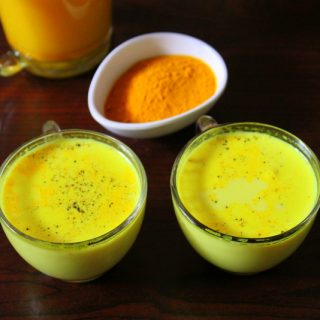 What are the benefits of haldi doodh?

It has great antiseptic, antiviral as well as antibacterial properties mainly in turmeric which can keep several infections and diseases away. Having turmeric with lukewarm water or milk is good for many health benefits such as cold and cough, reducing blood pressure etc.

Since turmeric is highly used as one of the main ingredients in making weight loss drinks, this milk along with turmeric can help in maintaining weight without putting on much weight and thus aiding in weight loss. Since it can also cause constipation and nausea like symptoms, it is better to notice them before taking them regularly.