Chicken pulao or chicken tahari is a delicious chicken rice recipe made using chicken and rice mixed together by adding aromatic spices. The chicken pulao shared here is along with a video procedure below and it tastes as good as biryani and also try out a replacement of chicken pulao which is nothing but the egg pulao if the chicken is not a preferred choice...

Some call it chicken tahari, some call it a quick biryani method but this is a variation of all those rice recipes where aromatic spices and aromatic flavors are infused to make this pulao than making it a simple plain pulao recipe.

This recipe can be called as a substitute for biryani and it is a perfect delicacy suitable to be made during festivals or occasions.

Also check out some more indian style of chicken delicacies such as tandoori chicken , chicken curry indian style all of which have been made without oven and one can also make these recipes in an otg oven or using barbeque methods. These taste absolutely amazing even if done without oven.

In this recipe I have cooked the chicken curry and added the soaked rice into it which is almost like a biryani but this technique is usually referred to as hyderabadi tahari in muslim style.

Pulao made here is so yummy and I assure this pulao would be everyone's favorite after biryani.

More on this recipe

I make this pulao very often and my family just loves to have this rice delicacy without any side dish.

If there is any side dish that is required for this pulao, then a simple onion raita or cucumber raita is enough to have with this yummy chicken pulao.

I have already shared a similar kind of tahari recipe made with mutton earlier and today I am posting a similar version of recipe called as chicken pulao which is made using cooked chicken mixed with rice.

The combination of chicken and rice is simply amazing and I am sure nobody can resist this rice delicacy.

This recipe can be made as special lunch recipes, dinner recipes or for festivals. I usually prefer to make these recipes on sundays or during special occasions as my family loves this rice dish to be made very often.

There are various pulao recipes that are made using vegetables but here I have made a non veg version of pulav which is using chicken to make the pulao and it turned out to be the best pulao recipe I ever made.

Below are the recipe details on how to make chicken pulao which looks quite appealing and simply irresistible.

Onions : Here, we need to golden brown the sliced onions, which give a good pulao flavor to the rice.

Tomatoes: This gives a good gravy and masala while cooking the rice in this masala.

Yogurt: Tomatoes and yogurt balances the sour flavor and sweet flavor of the onions as well as gives a good masala rice texture in the pulao.

However, if one looks forward to make a plain pulao then tomatoes can be skipped.

Spices and herbs: Since this is a pulao adding a touch of these ingredients is suggested.

Rice: I have used ordinary rice but it can be substituted with long grain basmati rice. If basmati rice is used then soak the rice for at least 35 minutes before mixing into the curry.

Water and rice proportion: Maintain the ratio in such a way that for 1 cup water 2 cups of rice is added.

Here, I have added 5 cups of water because there was already around a cup of water released from the yogurt and tomatoes. If no water is present and the gravy thickens then 6 cups of water can be added for 3 cups of rice.

Do not exceed the ratio as the rice may not be grainy and appears soggy. Half a cup more can be manageable but not more than that to prevent rice turning soggy. 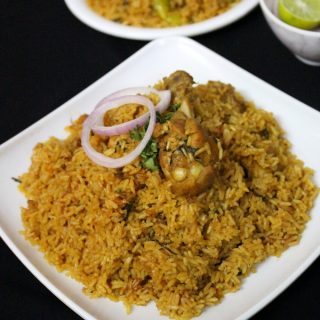