Chicken shahi korma, a delicious creamy korma recipe, made using rich ingredients such as nuts and yogurt which are cooked with chicken.

Shahi is the term used to describe "Royalty". In the Mughal Era, some of the chicken recipes which were made were said to be very royal, rich and had a mughlai or nawabi touch to them.

I have many various korma kind of recipes on the blog but this is one of the best ways of making korma as it is a very rich way of making the chicken curry by using some of the rich ingredients such as nuts and yogurt.

I have already shared many chicken recipes which are in the form of curry or gravy or korma and some of them are chicken gravy, kadai chicken, murgh makhani, chicken butter masala which are all rich gravies which mainly have kaju or cashew nuts used while cooking them.

How to make this shahi chicken:

To make this chicken recipe, the chicken is first marinated with yogurt and spices which is then cooked by adding the paste of dry fruits that is nuts such as almonds, cashew nuts and then using fried onions.

All these ingredients used makes the gravy a rich and excellent taste which has both flavor and aroma because of the spices used in the curry.

Chicken: The chicken which is used here is a normal chicken and it tastes best if chicken is not boneless.

Almonds: These are basically called as badam and they taste amazing if added as a paste in curries be it vegetarian or non vegetarian curries. Usually shahi curries have these nuts as a must ingredient to enhance the taste of the gravy.

Cashew nuts: All the rich and shahi gravies are incomplete without using these and are basically called as kaju and taste rich if added in korma recipes and they make the gravy quite heavy, creamy and nawabi.

Yogurt: Every korma recipe usually made has to use yogurt or curd or dahi to balance the sweetness of the curries and the flavor of the whole gravy too tastes good if it is added. Without yogurt, the korma does not give the gravy its taste that actually is needed.

Fried onions: The next most important ingredient is the fried onions, which should be fried separately and added in the end by crushing them or can be added by making a paste of them. Here, I have crushed and added them in the end.

These are the four main ingredients excluding chicken which form the main base to a get a shahi gravy.

Other ingredients to be added are the spices which are important too such as coriander powder and ginger garlic paste (I always prefer home made one as it gives a fresh taste), herbs which are a must to make the gravy very special and suitable to be eaten with rice recipes such as pulao recipe or bagara rice.

I have not used whole spices in the beginning of the recipe as it would make the korma too spicy and since I wanted to balance the spice flavor, I have just added garam masala powder. If required whole spices such as cloves, cardamoms, bay leaf can be added before adding marinated chicken into the oil.

Chicken is one of the highly used ingredient to make non veg dishes apart from mutton recipes and fish and the chicken can be used to make thousands of varieties ranging from starters to main course meals to various snacks as well.

I have added many recipes of chicken on my blog and I would be glad enough to add many more of them as I keep updating my blog.

This gravy tastes best with flat breads such as naan, rumali roti or recipes such as parotta, which is already shared on my blog but it can be served with special rice recipes too such as veg pulao or with plain steamed rice.

Check out the detailed recipe below which is step by step and also has a video procedure too...

How to make chicken shahi korma: 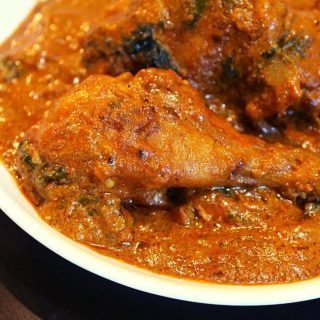 To marinate the chicken:

To marinate the chicken:

Making of the shahi chicken: