This toast is a quick snack recipe that can be made in just 5 to 10 minutes no matter which cooking technology is used.

What is chilli cheese toast:

The toast is made by toasting bread and is done by applying butter mix to the bread and then spreading grated cheese all over the bread.

The bread is then placed in the oven for about 5 minutes or 2 minutes more for the cheese to melt perfectly and for he bread to turn out crunchy and tasty.

The same arrangement can be done on a griddle by heating the tawa, applying butter to it and then toasting the bread well for 5 minutes on low to medium flame or until the cheese melts.

For more help with the making procedure, I have shared a video as well.

Baking in oven or tawa?

I would personally prefer to bake in the oven as the bread turns out crunchier and the toast is toasted to perfection at right temperature and timing without the base of the bread burning or turning black.

The tawa toast too comes out well but the toast if cooked on the griddle/tawa for a longer time burns the base of the bread and turns the base to black if not checked in between.

Which butter to apply?

The butter used here is unsalted and I have added salt to butter and mixed it well before applying to the bread.

Any butter could be applied and if salted butter is used, do not use salt while mixing butter with other spices.

There are other bread recipes on the blog and bread sometimes goes well with eggs and such recipes are bread omelette, bread toast and other bread dishes to try are bread upma, bread gulab jamun which are other unique recipes to be tried with bread.

I have also shared a sweet recipe using bread which is the double ka meetha that tastes good if had after meals or during occasions, it is a special sweet made to relish with other main course meals.

What kind of bread to use to make this toast:

Generally, toasts taste good with white bread and if one is choosing an healthier option, then using a brown bread would be suggestible but the taste of the toast is not as good as the one made with white toast.

Organic bread too can be used but overall, white bread slices taste good to make this simple bread recipe.

Other kind of bread recipes?

There are many ways a bread can be used such as making snacks like bread pakora, bread roll and many sweet dishes like the one shared above.

Another similar bread recipe that can be made on a griddle or an oven is the bread pizza recipe which is a best snack or breakfast recipe loved by even kids as well.

If one is familiar with other breads such as pav then do try this special pav recipe such as pav bhaji recipe which tastes like the restaurant one’s and the bhaji made with pav can be used with any bread recipe.

Is it healthy to use bread?

Bread is healthy if used in a right way such as to make sandwiches or toast recipes which does not make use of oil/butter/cheese to it.

Which cheese to use for the toast?

There are many varieties of cheese available in market ranging from cheese chunks to grated cheese and with several brands but in this particular recipe I have used mozzarella cheese which is grated and it tastes good to make cheese toasts.

Check out the video procedure below to make the bread snack:

How to make chilli cheese toast recipe below: 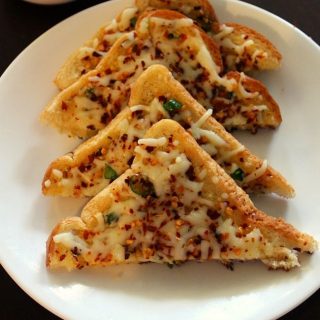 Toasting on the pan/griddle:

Baking the toast in oven: