I would love to update with more of pappu recipes, rasam recipes and sambar recipes which form the main meals down south.

Dals can be made as one pot pressure cooked method or dals can also be made in other ways by adding tamarind pulp mainly called as sambar in south india.

Dosakaya is a common vegetable found commonly down south and it appears as a yellow round cucumber which is also called as budma in urdu.

In hyderabad this particular dish is also made by mixing it with meat and is a very popular combination among muslims household. But in andhra region or telangana region it is eaten by making it in the form of a thokku, pachadi or chutney in various ways...

Down south dal recipes or pappu recipes are incomplete without tempering commonly called as popu in telugu and the tadka actually lifts up the flavors of the dish.

The tempering is sometimes given with garlic flavors which gives a real taste to the pappu of any vegetable...

Below are the recipe details of dosakaya tomato Pappu or a dal made using the veggie in cooker. 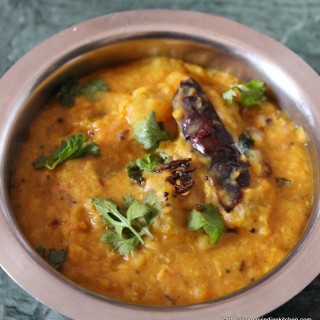 For pressure cooking the dal:

For tempering the dal:

For pressure cooking the dal:

Instead of using chopped tomatoes, tomato puree can be added to get gravy...