Gutti vankaya curry is a masala curry made using brinjals or vankaya in peanut, sesame masala.

What is Gutti Vankaya koora?

It is an andhra style of making brinjal recipe by stuffing peanut, sesame and coconut masala inside brinjal and cooking them.

Here, I have made a curry form of vankaya but it can be made by frying them as well which would be updated in other versions of this recipe.

The curry here has a gravy texture as well as gives a very balanced tangy touch to it which is perfect to be eaten with several recipes such as rice or roti.

I have used brinjal in making other kind of simple recipes too on the blog such as baingan masala, brinjal curry, vankaya pachadi, bagara baingan, baigan ki sabji .

It can be used to make plenty of recipes and we all are aware that it is the king of vegetables and it has got best taste by cooking them in masala gravies.

What are the different kinds of brinjals available?

They are available in different colors and size. They are small, large in size and have got colors in green, violet etc…

Any kind of brinjal is edible and the taste too is almost similar irrespective of the color and size.

There are several rice recipes too that can be made using this veggie.

How to make the special gutti vankaya?

The gutti vankaya is nothing but vankaya or brinjal or aubergine or baigan is stuffed with a masala gravy and cooked well.

The masala that is used is peanuts, coconut, sesame, coriander and cumin which are all finely roasted and made into a fine thick paste.

This paste is then stuffed inside the vankaya, which is slit into four halves and then filled with the stuffing.

To make this curry tempering is given first and tempering is called as ‘popu’ in telugu and then these brinjals are stir fried for few minutes and then cooked with the masala.

To make this recipe one can also use green color brinjals and it is better to use medium size vankaya rather than using large one’s which do not taste good.

What other masala recipes can be made?

How important are choosing brinjals?

The quality of brinjals can spoil the dish completely and the reason for this could be what kind of vankaya is used.

If fresh brinjals are used then this stuffed brinjal curry turns out the best. If brinjals are not fresh and using them after a long time after plucking them fresh could spoil the dish.

The flesh inside the brinjals turn sour and could change the taste of the gravy. It is always better to use brinjals when fresh to make any brinjal recipe.

Tips to use the vankaya or brinjal: 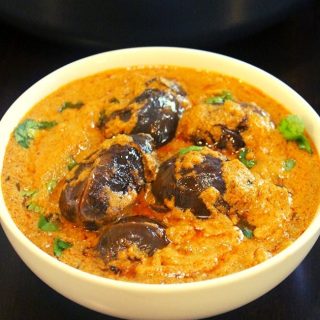