Jeera Aloo Recipe is an aloo recipe that is boiled and diced and sauteed in tempering with the flavours of cumin seeds and cumin powder/jeera powder and also few other spices. This aloo recipe is healthy as the potatoes/aloo are boiled and not fried.

The aloo recipe using cumin powder and coriander powder is quite simple and easy and does not require lots of hard work.

This simple recipe can be made in a while and does not require many ingredients and it just needs few basic ingredients which are easily available in indian kitchens.

This is basically a north Indian or a Punjabi dish which is usually eaten with roti or it can be taken as a side dish along with dal and rice.

To make this recipe do not use potatoes that have lots of starch or sweetness in the potatoes as the actual cumin flavour dies if the potatoes are sweet in the curry.

Make sure to use small aloo which does not contain sweetness and tastes chatpata by adding the cumin powder.

Aloo is a vegetable which is usually liked by all age groups and this wonder vegetable can be used to make various kinds of recipes and in every form.

There are many varieties of side dishes that can be used to make using this veggie such as aloo bajji and every recipe tried out would turn out amazing and tasty.

Jeera aloo recipe is a punjabi side dish but this simple recipe can be tried out in various ways by adding spices of our own choice and mainly giving the jeera flavor to it.

Below are the detailed instructions on how to make this simple recipe of aloo with jeera powder flavour. 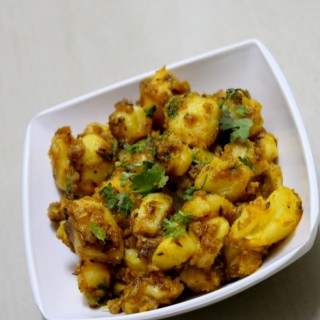 For the jeera aloo recipe: