Jowar Roti Recipe is a common flat bread made using Sorghum flour/jowar flour. The jowar flour is totally glutten free and an unleavened flat bread. Serve the roti with chutneys.

The jwarichi bhakri is made usually with hands traditionally and it requires skill to be made. Please watch the video below on how to make jowar roti with hands.

This jowar roti is usually common across Karnataka region and Andhra Pradesh. It is also common across Maharashtra and is called as jwarichi bhakri over there.

In Andhra region it is called as jonna rotte and its also liked by people who are in agriculture field  as this roti gives them energy to work for full day and it is very affordable..

The roti needs a lot of physical work and Mummy’s are expert in making this roti. They make the roti with such a great skill of hands and its a treat to watch them rotate the roti so smoothly and easily.

Once we get the art of rotating the roti with the hands then this is the healthiest roti that can be eaten during summer time. It is also recommended for people who are suffering from diabetes.

This roti can be eaten with any vegetable side dish or any kind of veg stir fry… It tastes well with any side dish made with vegetables or any dal recipe. The best time to eat this roti is summer time.

Eating this roti is so filling and one jowar roti is enough to keep us going for the whole day. The jowar ki roti has to be handled carefully and it can be done only with lots and lots of practice.

If one is from South India then elders of the family might make these rotis with so mush of flair and it feels so good to watch them doing these rotis and so do my elders. Hope this traditional recipe does not get unnoticed as this is a healthy recipe.

Learn how to make jonna rotte with detailed recipe below and also watch the video procedure for a better understanding. 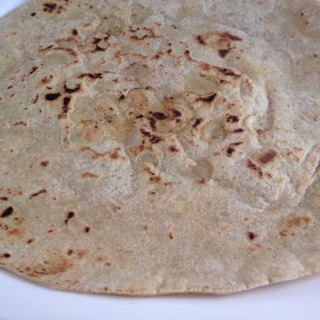 Calories: 120kcal
Want To Watch Video Recipes?SUBSCRIBE US ON YOUTUBE!

Step by Step details with Video for Jowar Roti: