Oats chilla or oats ka chilla is a healthy breakfast recipe with oats made in the form of a pancake and good to eat for morning breakfasts. Oatmeal is a very healthy cereal and it has got lots of health benefits and many have oatmeal as a means to reduce weight and cut out the cholesterol levels in the body.

Other healthy oats recipes that could be tried from my blog which are healthy and very common indian breakfast recipes that can be made in just a couple of minutes are oats dosa, oats upma etc...

Having oatmeal as a regular diet and making several varieties of recipes with oats is a good breakfast idea and it keeps us in good health as well.

Here, I have made a chilla out of oats which is slightly thick in texture and not as thin as dosa. Oats cheela is made by powdering the oatmeal and mixing certain herbs and spices.

There are many interesting and creative recipes that can be tried out with oats and oats are the one of the healthiest things one could include in a diet.

If one is looking for a quick oats recipe then, this chilla is the best thing to have in the morning.

Any kind of chilla is made in a similar way and there are many instant chillas that can be made like besan ka chilla, moong ka chilla etc...

This chilla is good with any sauce or chutney or just have it plain. This can also be served along with ketchup or any dip to get a better taste of the cheela.

I have decided to post some quick and instant breakfast recipes that could be done in a couple of minutes and rush to work and still not skip the most important meal of the day.

I have shared this cheela with the help of a video and also have mentioned all the steps in detail below.

How to make oats chilla recipe: 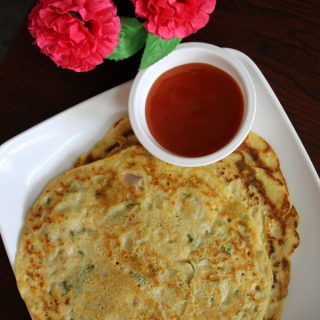 Making of the oats chilla batter:

1. Here, I have used wheat flour but one can even add chick pea flour or semolina instead of wheat flour to make the cheela batter.