Rajma Chawal Recipe needs no introduction across northern indian region and is a most popular dish across North India and mainly its a punjabi cuisine made with red beans(rajma) and mixed with cooked rice.

Related Punjabi Recipes to try out:

There are several punjabi recipes on the blog that should be definitely tried such as murgh makhani, punjabi chicken etc....

Rajma chawal is a complete dish apt for lunch and dinners. It is made using rajma that is red kidney beans or small red beans and eaten along with rice/chawal.

When I tried punjabi chole I was so excited to try another punjabi cuisine and rajma was my attempt and it turned out awesome and tasty.

Rajma curry can easily be eaten with rice or roti but rajma cannot be made instantly and it has to be soaked for hours or overnight to make this recipe.

The recipe is very easy and simple in making but it takes longer time to soak and then takes long time to pressure cook the rajma.

This punjabi dish has become one of my favorites along with punjabi chole. The chawal recipe has got the gravy texture and  the rajma is cooked or tenderized perfectly here. It has also been made with many dry spices to give aroma and good rajma flavor...

Rajma is made with a common base that is onions and tomato puree but with slight variations and here instead of using puree of both the ingredients I have finely chopped onions and tomatoes and then made the gravy for rajma recipe and then mixed with the cooked rice.

I am sure my blog readers would love to try this version of rajma chawal and also hoping to receive feedback on this recipe.

Check out step by step instructions and detailed recipe below:

This is a special north indian recipe and should definitely be tried... 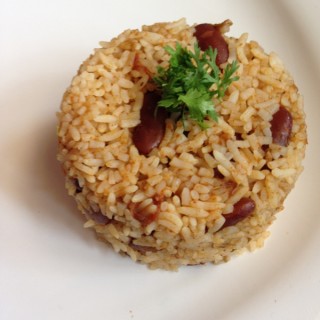