Aloo Pakora Recipe or aloo pakora recipe is a snacks pakora recipe that can be taken as a tea time snack. They are simple and easy fritters made with besan and potatoes and so are called potato pakora recipe or potato fritters.

The pakora/pakoda are usually fritters made with lentils or lentils flour. The pakodas can be made any kind of dal be it chana dal(chick peas), urad dal(split black gram), moong dal(green gram) etc...

Pakoda as a form of snacks are very common in India and all the other states of India. Everyone prefers to eat them during cold evenings or during rains or during tea time.

They come out very tasty and are almost liked by everyone. There are many kinds of pakoras that can be made like egg pakoda, palak pakoda, moong dal pakoda, urad dal pakoda, chana dal pakoda etc...

Among all the pakodas , onion pakodas are most commonly made, but aloo pakora recipe is  very simple to make and also gives a different taste compared to the plain pakoda, they are soft to eat as well.

The pakora or fritters are basically made with chana dal flour or chick pea flour batter and into it goes any kind of stuffings like palak or egg or potatoes etc...

The pakoda is commonly made as a ramazan special item during iftars. The iftars are usually done with a snack item as they tend to be hot and give a taste to the tongue after breaking a long fast.

During Ramazan every kind of snack item is made and relished. Using chick peas for pakoda gives a taste and enhances the taste if stuffings are used. 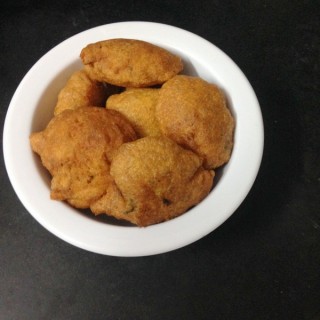 1.The batter should not be too thin which spoils the pakoda consistency.
2.Also one thing to be remembered while frying is they should not be fried on high flame as the outer side gets darker and the inner batter may not cook well.
3.It is better to fry on sim to medium flame.
4.Adding soda makes the pakora fluffy and soft.