Ambur mutton biryani and ambur chicken biryani are not only a popular dish across Ambur town but various other dishes like chicken varieties and other non-veg varieties too are known over there. When we talk about biryani recipes there is a difference in the biryani making procedure of Hyderabad and Ambur.

Ambur biryani is almost similar to the tehri recipe which has been posted earlier but the difference is here we need to use red chilli paste instead of powder and the biryani can be eaten with just plain raita or korma.

This biryani recipe is an adaptation of the biryani from the town of ambur and I have made slight changes according to the needs of the usual biryani and the outcome is just awesome. Other south Indian mutton recipes are mutton sukka and mutton kulambu.

This biryani is quite popular over there and most people love the biryani from a hotel called as 'star hotel' in Ambur town. This biryani is popularly called a star biryani recipe.

The recipe is totally different from Hyderabadi biryani but the common part in both kinds of biryani is giving dum. Ambur mutton biryani takes lots of onions and tomatoes, red chilli paste but Hyderabadi biryani does not take any of those ingredients and onions are added in the form of fried onions.

Below are the recipe details for the star biryani recipe from Ambur... 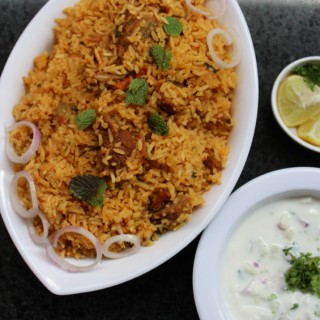 1.Ambur biryani does not take any ghee and lemon juice but I have made certain changes to the recipe and added them. These ingredients can be skipped.
2.Adding oil in biryani recipes is necessary as the biryani turns out dry if not added as required.
3.Placing a tawa is essential as the biryani may burn at the bottom if the tawa is not placed.
4.If basmati rice is used for this biryani then soak it for half an hour to 45 minutes before cooking the rice.