Egg pakoda recipe or egg fritters is another variation of different pakodas made with different stuffings. We all love to eat pakodas like aloo pakoda or bread pakoda but it gets boring to eat the same kind of pakoda all the time. Therefore, it is a great idea to try out various fritters and enjoy their taste with any chutney or sauce or ketchup.

Egg pakoda recipe of mine comes with egg stuffing inside the batter. The egg is boiled and stuffed inside. The boiled egg needs to be cut into two to three halves and then use it for stuffing or you can also use whole boiled egg , fry it along with the batter and cut into two halves.

I love making different pakodas or vadas during cold evenings or winters or rainy as the pleasant weather makes us eat hot snacks with a hot cup of tea.

I would like my readers to try out and learn various recipes of pakodas  or vadas and do give us your feedback.

Indians are crazy for snacks and so am I. I love to try every dish from across different states and post those recipes which are tried and tested.

Usually lentils are preferred to make fritters and among them chana dal or chick pea flour is commonly used for most of the fritters. Other lentils which taste good for fritters are green gram(moong dal), black gram(urad dal) etc...

These kind of recipes work well  even for the kids as they tend to eat light food when they are back home from school and sometimes serving them with snacks is not a bad idea.

Egg pakoda recipe here is coated with the chick pea flour batter and deep fried. I always love to make different snack recipes during iftar in the month of ramazan and so try out various pakodas.

Let us take a look into what goes into making egg pakoda recipe: 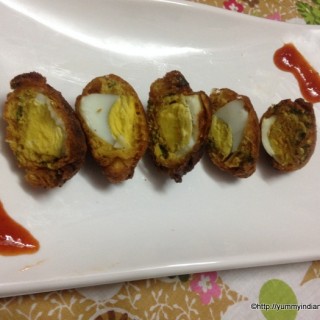 1.Always be careful while deep frying.
2.Egg fritters may contain slight water content inside the egg, therefore it is better to stay at a distance and deep fry.