Green moong dal recipe, a green gram curry which is made using sabut moong dal with a curry method which is a very healthy and high protein curry. It goes well with rice and tastes best if made like a curry rather than the dal.

What is Green Gram?

Green gram is an English terminology for sabut moong dal or mung beans which is similar to lentils family.

Lentils like toor dal and masoor dal are made into dal curries and this sabut moong ki dal too can be used to make many varieties...

This is the most healthiest lentil which is used to make healthy salads, sprouts, dosa, dal etc...

This is a moong dal tadka kind of a curry where the dal is first separately boiled and then added to the flavorful tadka in onion tomato gravy and cooked together by adding water.

This method of making dal goes well with any main course such as rice or roti or parotta ...

About dals and lentils

Dals are pulses and these dals or lentils are highly used in Indian cuisine.

Dals are served along side chutneys, pickles, papad and ghee in Indian households. Lentils and legumes are usually prepared to serve with roti, rice or paratha for lunch and dinner.

There are different pulses in India and among them the common ones are toor dal or arhar dal, masoor dal, chana dal, moong dal, urad dal etc...I have already shared dal with toor which is punjabi dal tadka ...

These dal or lentils are not only used to make indian dal recipes but are also used to make many indian vegetarian recipes such as vada, dosa, veg curries, dals, pakora , soups etc...and all lentils which are basically pulses are full of proteins.

To make this recipe I have added quite a few ingredients such as initial tempering, dry spices and some onions and tomatoes.

Spices: To make it aromatic, add some whole garam masala such as dalchini/ cinnamon and cloves. It also uses some dry spices which are common in every Indian dish such as cumin powder, coriander powder, ginger garlic paste which are the main flavor giving ingredients to the curry.

Green gram: The main ingredient of the dish is green moong beans which is separately boiled and then cooked in onion tomato gravy to let all the flavors of the curry be absorbed into the dal.

Onions and Tomatoes form the main gravy base which actually make the dal tasty and without these ingredients the dal turns out just plain and boiled which can only be served with roti.

Methi leaves: Lastly, add some dried kasoori methi to any dal tadka which brings an aromatic flavor and taste to the dal curries.

Tips to make the dal perfect

What to serve as accompaniments?

Since this is a plain basic curry or dal, it is best if served with roti or phulka.

Check the recipe below which is simple, healthy and one of the best dal recipes. 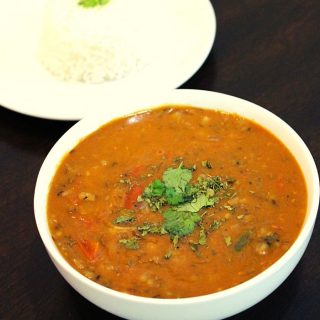