Tamatar ki chutney, a chutney recipe made by cooking red tomatoes by giving a tempering and by adding basic spices into it. There are many tomato recipes on the blog such as tomato pickle, tomato pappu and shall be adding many more recipes that use tomato as the main ingredient.

Tomatoes are great for the skin as they are a high source of Vitamin C and gives a good glow to the skin texture if included regularly in our daily diet.

Tomatoes are also said to reduce the risk of cancer and other diseases related to heart and blood pressure.

Tomatoes are also a great source of Vitamin K which is helpful in blood clotting and hence healing any sort of wound quickly.

How to use tomatoes in many ways

Here, in this video the tamatar ki chutney made is in Hyderabadi style and one can make various versions of this chutney.

I have slow cooked the chopped tomatoes which turn mushy and pulpy as we cook the tomatoes. But, to get a good aroma and flavor to the chutney, tempering can be done initially and then cooking the tomatoes by adding spices that give a good gravy to the chutney.

Other ways to make the chutney recipes

The chutney that is made to be served with breakfast recipes such as idli, dosa is mainly made by using tomatoes as the main ingredient along with peanuts, green chillies, tamarind etc...which are roasted well, blended well by making them into a fine paste.

This tamatar ki chutney made here is a very delicious chutney, that can be served with rice or other South Indian breakfast is shared along with a video and also by sharing step by step detail for the recipe.

How to make this tamatar ki chatni 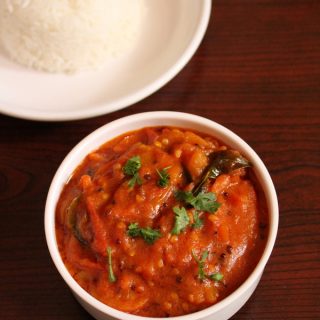 Loved this recipe? If you like this recipe then do leave us your feedback below in the comments section and share us your valuable feedback and also share us your different version of making a tomato chutney recipe using tomatoes...