Aloo Poha recipe is a maharashtrian snack recipe apart from kanda poha and is a hugely popular snack dish made using flattened rice and potato and so is called as potato poha recipe.

Poha basically is a flattened rice or beaten rice usually called as poha in marathi and is mostly called as aval in tamil and atukulu in telugu.

Also check out quick snacks such as bread upma, rava upma that are quick for breakfast and evening snacks.

This snack recipe is also eaten as a breakfast recipe in that region. I have already shared kanda poha where I have used onions but here in this recipe I have used aloo which is usually called as batata in marathi or aloo in hindi.

This recipe too is a quick poha recipe and in this aloo poha recipe we add boiled and mashed potatoes which interestingly gives a very delicious flavor.

The poha has to be washed twice or thrice and if washed many times it turns out soggy and does not taste well. The poha is available as thin poha or thick poha and to make this recipe we make use of thick flattened rice.

Poha can be made into many recipes and they are good to give it to kids as a quick breakfast dish or as evening snacks when they return from a tiring day from school.

All we need to have is boiled potatoes handy and the dish is ready in minutes. The ingredients that go into making aloo poha are quite basic and regular tadka giving ingredients.

The color of the recipe is so tempting that one can never resist trying it out and treating family members with this breakfast and snack recipe...

The poha selection while buying has to be from a good quality brand to get the right texture and flavor...

How to make aloo poha recipe below: 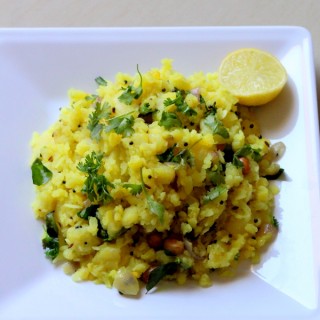