Chicken malai tikka, a kabab kind of chicken recipe which is a creamy and rich kabab recipe cooked in a pan without oven.

What is a kabab or tikka?:

Kabab or tikka is a dry dish usually made in tandoor and the kababs are cooked in the tandoor at high temperatures inside the tandoor.

Not only tandoor or oven but grilled pans can be used to make tikka or kebab  in case of emergency if there is no OTG oven at home.

There are several varieties of tikka recipes made using chicken such as malai tikka which is shown in this recipe or simple traditional method of making tikka recipe which is already shared on the blog with name chicken tikka recipe.

Tikka is basically nothing but marinated chicken is fixed to the skewers and placed in tandoor or oven. They are basically similar to kebabs but the names are sometimes referred to as tikka or kabab. Here, tikka are usually given smokey flavor which lifts up the flavors of the dish.

Difference is very little and both are dry chicken pieces cooked in tandoor or barbecue.

How is chicken malai tikka made?:

Chicken malai tikka is marinated with yogurt, dry spices and kaju green chilli paste, mixed well, marinated for some time and then cooked or sauteed in a pan with oil or butter.

This particular dish can be served with any kind of dip, chutney or accompanied with salad and works wonders as a starter recipe.

If one wishes to make it in an oven, go ahead and make it in the OTG oven or an electric tandoor.

This tikka recipe has a creamy texture and appears a bit white or yellow in color. These tikka or kababs are made in other ways such as reshmi kabab, boti kabab,.

Kababs are not only made using non veg such as chicken or mutton but also made using paneer too which is the best alternative for vegetarians in eating kababs or tikka.

Why it has malai in its name?:

It is malai tikka because it has kaju paste which gives a creamy, malaidaar texture as well as it takes in yogurt which gives a milky and rich touch to the kabab and it takes herbs like coriander leaves and green chillies which also uses garam masala and spices along with many more ingredients to make this dish.

There are many more kabab and tikka varieties in both vegetarian and non vegetarian recipes which shall be added as we continue posting them hopefully along with the video procedure.

Do check out the video procedure to make this recipe and do leave us your feedback and comments below and also we value your suggestions and other versions for this recipe. 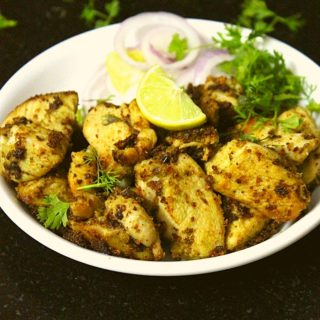 Cooking of the tikka:

Important note: How to give a smoky flavor: Other important tips: