Egg kulambu, a south Indian style of making egg-based gravy and this particular egg curry go well with any main course dish such as roti, rice etc. Kulambu or Kuzhambu is simple Tamil terminology for gravy based dishes and when we say egg curry it is commonly known as muttai kulambu or muttai kuzhambu in the south Indian regions of Tamil Nadu.

Do check out other egg recipes on my blog from other regions as well and hope to continue sharing more and more egg related stuff on the blog.

Egg recipes are usually preferred when we are tired of eating regular chicken or mutton recipes. I have shared few egg based gravies on my blog and would love to share many more egg curries which are suitable to be eaten with rice, roti or paratha.

Egg is a major source of protein and including it in our daily diet helps us in building body and strengthening it. Having eggs regularly mainly during winters and rains keeps the body warm and is a good remedy for people suffering from cold and cough.

Eggs should also be given to kids during early morning breakfast with a glass of milk that helps them in having a wonderful day.

Eggs are a good source of calcium as well and including eggs often in our diet by boiling or in any form makes our bones strong and healthy.

Egg curries are basically made in different varieties and there are several ways in which egg curries can be made such as one method is using onions and tomatoes. In another method we basically use coconut paste to make a gravy base and it tastes as good as non veg dishes like chicken curries or mutton curries.

Making of the recipe

Here I have used onions, tomatoes to make the base of the gravy and to make it more interesting and yummy I have tried to use fresh coconut and khus khus/ poppy seeds paste to give a delicious base to the egg gravy.

Giving a slight tempering in the beginning and adding this blended paste to the gravy along with some sour taste which can be brought by adding tamarind pulp and cooking boiled eggs for few minutes with this curry gives a good flavor to the egg curry.

There are other kulambu recipes or gravy recipes made using other non veg ingredients such as chicken or mutton and one such kulambu recipe is chettinad chicken which is a gravy based recipe for chicken.

Below is the recipe card for making egg kulambu which is a very popular egg curry down south that goes well with pulao recipes and can be made for several occasions. 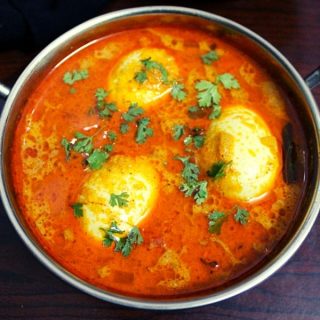 Do leave us your feedback on this version of kulambu recipe and there are many more kulambu gravies in both vegetarian and non vegetarian sides which are amazing south indian curries. Hope to receive a positive reply which would help me in making and writing many more south indian recipes.