Ginger tea for cold is a simple tea recipe usually taken to get relief from ailments like cold, flu and sore throat. This tea is a soothing drink during colds and winters.

Ginger is basically a root and a useful ingredient in our kitchens. This ginger root is not only popular in Indian origin but it is a popular root all across the globe since it has various benefits.

How to use ginger?

In some countries the ginger is usually grated by removing the peel and sometimes if the ginger skin is fresh and pale then the root is directly grated and added into the cooking.

In Indian origin, it is basically added in the form of a ginger paste and also depending on the kind of a recipe, it is added in different ways such as by grating, chopping into small pieces to name a few...

How to make ginger tea:

Ginger tea can be made in simple ways with many variations.

When to consume this tea?

The ginger tea can be taken any time of the day if one suffers from cold and throat issues. It should be taken at least twice or thrice to have a soothing relief inside the throat and to get rid of the virus that causes these ailments.

What if there is no ginger?

Ginger root is available almost everywhere and in every country. However, if ginger isn't available then it is better to look out for an alternative such as 'ginger powder'.

Ginger powder is easily available in grocery stores however, it is best when fresh ginger is used.

Here in this tea, not only just ginger and water are the main ingredients but other ingredients such as lemon and turmeric too are important.

Lemon helps in reducing the mucous or the phlegm if mixed in this drink and turmeric is a great ingredient to fight against cold and flu.

This drink or tea not only relieves from cold but also relieves us from cough as well.

When is cold usually caused:?

Sore throat, cold and cough are ailments which are usually occurred during winters or during the monsoon. The reason is because of the low temperature as well as the increase in the duration of the viruses during those climatic conditions.

Therefore, in order to get rid of those problems we can try out these home remedies that are simple, effective and worth trying.

Without further ado, here is a simple tea recipe made using simple stuff easily available in every kitchen and is a quick to do tea just in a couple of minutes.

Check out the details below...

How to make ginger tea for cold: 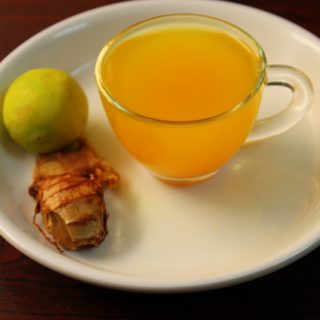 Nutrition Facts
ginger tea for cold recipe, ginger for colds
Amount Per Serving
Calories 20
* Percent Daily Values are based on a 2000 calorie diet.
WANT TO WATCH VIDEO RECIPES?SUBSCRIBE US ON YOUTUBE

Do try this effective home remedy and leave us your feedback after using this remedy and also leave in your suggestions for our homemade ginger tea used to treat cold....