Vankaya pachadi recipe is a brinjal pachadi or chutney form of recipe made using eggplant/aubergine and this particular vegetable is referred to as vankaya in the region of andhra pradesh or in telugu lingo it is termed as vankaya.

Vankaya is an amazing vegetable and I am glad to share one of the many recipes that can be made using vankaya. Vankaya is available in many forms in India in different color like green or purple and in small and long shapes.

Vegetables in the south are most commonly used to make various chutneys or pachadi recipes which go very well with rice and ghee.

They can also be eaten with dal and meals in south india definitely include a chutney or a pachadi in the meal platter.

Brinjal pachadi is an instant pachadi or a pickle kind of recipe which is quite easy and can be made very quickly with available ingredients at home and it tastes amazing with dal ghee and rice.

When there is vankaya available, one of the best way to use would be to make it in the form of a pachadi and store it for a couple of days and use it as and when required.

This pachadi in this post is very yummy and I have used few ingredients like tamarind, tomatoes and green chillies which actually form the main base of any instant pachadi or chutney recipe down south and lastly the flavors are picked up by giving tempering.

Below are the recipe details on how to make vankaya pachadi which is an awesome side dish down south included in the south indian meal platter.

How to make vankaya pachadi recipe below: 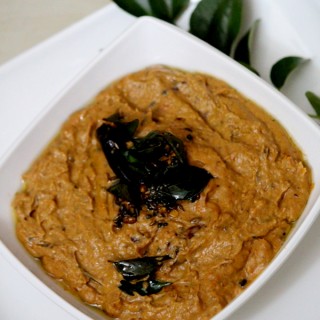 1. A pinch of turmeric can be added into the tadka in the end if required to make the chutney colorful and appealing.