Chicken dum biryani here is made in oven and is one of the simple methods of making biryani in oven without any hurdles.

The biryani made here is done using chicken which is perfectly baked in the oven along with the rice.

Check out other biryani recipes on the blog made using traditional method such as chicken biryani, egg biryani or anda biryani etc...

Also there are other biryani recipes such as ambur biryani which is a south indian style of making biryani.

How many ways a biryani can be made?

I decided to share this article after I started staying abroad where I found out that making biryani on cook top is less preferable and it is best to use an oven to make it.

Therefore, after trying it out along with my Hubby, I found out that this is the best way to make dum biryani if there is a difficulty of finding Indian utensils abroad.

The biryani in oven is baked easily and it does not burn at the base and comes out with long grain rice and perfectly cooked chicken.

Tips to be followed to make dum biryani in oven:

Side dish for biryani:

It can be eaten plain or can be eaten with raita such as onion raita, cucumber raita, bagara baingan, baingan masala or mirchi ka salan, gutti vankaya curry.

Below are the step by step details to make dum biryani in oven along with a video and stay tuned as there will be many more biryani recipes that would be shared on the blog which are made on stove top as well as in oven and cooker rice recipes. 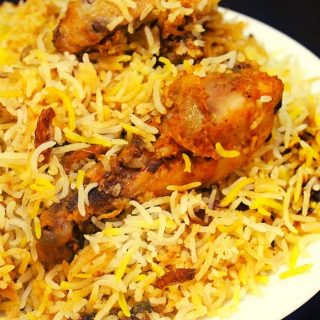 Step 1 (To marinate the chicken):